the (non)-sense of anti-feminists: women who oppose feminism 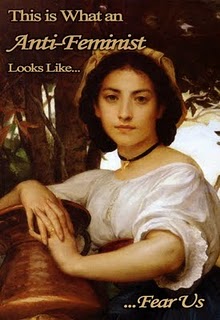 This article is inspired by Margie Abbott, the wife of Tony Abbot who came out yesterday to dispute suggestions Tony Abbott has a problem with women in power. It’s not surprising Margie Abbott has said this considering they have been married a number of years, but is she defending the indefensible?

This question led me to remembering my great surprise when I discovered that women could be just as opposed to feminism as men. I guess it was naivety on my part to think anti-feminists were only men. But this wasn’t a great surprise because I only heard anti-feminist comments from men, such as ‘I’m not holding a door open for a woman. She’s got equality now; she can do it for herself.’

I found women’s opposition surprising because feminism has brought so many positives to women’s lives and opposing feminism is strange to me. Why would anyone voice their opposition and dislike for something that could improve their life? There are many reasons why women would do this, and for similar reasons to men – they genuinely disagree with feminism. But it could also be because women believe there is genuine equality now and feminism is no longer needed. For younger women, it is easier to believe, as it is for a lot of men.

But in my belief that anti-feminism is also a social movement, the benefits of women opposing feminism are numerous for anti-feminism. Imagine the increasing strength given to anti-feminist arguments when those who feminism seeks to give power to are rejecting the very reasons why such a power should be given to them. For example, feminism suggests neither women nor men are naturally suited to any sphere of work, which means that women should not be responsible for all or the majority of housework. But some women say that yes, women are naturally more domestic and because of this are better at housework and this is the reason why women should be responsible for it. But to say this helps spread the idea that feminism doesn’t understand women at all and feminism’s perception of the world is skewed.

Women opposed to feminism have established their own groups, specifically to oppose feminism. One such group, Endeavour Forum, based in Melbourne, was originally called Women Who Want to be Women. This group started in the 1970s in specific response to what they saw as “militant feminism”. They believe that abortion, equal opportunity and affirmative action were three areas feminism should never have debated and are also forthright in their rejection of abortion. But Endeavour Forum is not the only group specifically established to oppose feminism.

Ladies Against Feminism (LAF) is a much younger group based in the United States. The “follies of feminism” were the reason the group was established in 2002 and they use the bible as a way to understand women, and their role in life. LAF are very much a group who believe that women are naturally suited to housework, and encourage women to better maintain a home as they see this as a powerful and fulfilling role for women.

Women’s opposition to feminism is powerful and important to anti-feminism. Yet the irony is that as they support a more conservative and traditional role for women, they are engaging in the methods of social activism they are highly critical of feminists for doing. But maybe women who oppose anti-feminism are a bit like Margie Abbott; when something they love is in trouble, they will, in the name of true womanhood, come to its rescue even if it is indefensible.

4 thoughts on “the (non)-sense of anti-feminists: women who oppose feminism”