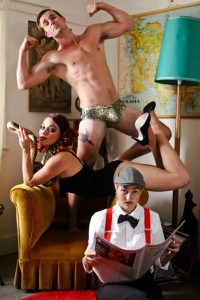 Cut Snake is an award-winning, Australian theatre production presented in Canberra by Ainslie and Gorman Arts Centres, Canberra Youth Theatre and You Are Here; and produced by independent theatre company, ARTHUR.

“Jumper was conceived during a wild electrical storm. His mum, Pam, had been on a 4-day bender at a bushdoof with a travelling fire twirler named Guy. He shoved a jumper up his t-shirt and suggested they have a baby… 9 months later, Guy had twirled on, and little Jumper was born…”

Jumper, Kiki and Bob are three best friends, with their heads in the clouds and full of ridiculous, ambitious and almost unbelievable dreams. Kiki wants to win gold in fencing at the Olympics, and tango on the peak of Mount Kilimanjaro with a band of gypsies and a bearded lady; Bob, with a little help from Jumper, may have cracked the secret to time travel; and Jumper…well, Jumper falls in love with a snake named Trixi before embarking on a Contiki tour of ‘EuropeAsia’- which basically consists of getting drunk in famous places. Suddenly, however, tragedy strikes and their worlds change in dramatic and often hilarious ways.

Jesus, John Lennon and Adam and Eve all make cameo appearances, Word War II is visited and a fairy sighted- but the real question on everybody’s lips, the Golden Question, is in a fight between a horse and a hippo, who would emerge victorious?

Written with finesse and wit by Amelia Evans and Dan Giovannoni and directed/devised by Paige Rattray; the production has a heart-warming DIY quality that draws the audience in and makes you feel at home. Performers Julia Billington, Catherine Davies & Kevin Kiernan-Molloy shine: their ease of movement and ability to switch instantly between characters, emotions and facial expressions, combined with an excellent mastery of backyard acrobatics, makes for an immersive and entertaining production.

Ok, I know I’m gushing- but seriously, I really liked it and if you’re out and about in Canberra tomorrow you would be silly not to check it out. My secret sources at the Ainslie and Gorman House Arts Centre even tell me there are still tickets available, so go out and have yourselves a rollicking good time!

And the fun doesn’t stop there; from 8pm tomorrow night the western courtyard of the Gorman Arts Centre will be awash with the tunes of awesome Canberra bands as part of Free Music For Rich Kids, presented by You Are Here.