why we need ‘women only’ spaces 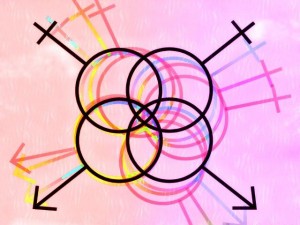 Women’s only spaces cop a lot of flack. Why do we need a women’s room on University campuses, people ask? Why do feminist groups hold women’s only meetings?

One community with a strong tradition of women’s only spaces is student magazines. It this case, it’s not a meeting, or a special room. It’s an edition.

I’m one of three editors of the student magazine at Adelaide University. It’s called On Dit (pronounced ‘on dee’, and meaning ‘they say’). Every year, we make one edition called Elle Dit. Elle Dit (meaning ‘she says’) is written exclusively by women. It’s a women’s edition.

But we’re not alone in this. Earlier this month, Honi Soit, the student paper at USyd ran a ‘Women’s Honi’. Rabelais, of La Trobe University, and Vertigo from UTS, both run one every year.

Most of these have a history going back decades, to a time when it was theoretically much more controversial to have a policy of ‘women’s only’. This being so, history as a reason for doing something is weak, at best. At worst, it is to do things in the same name as all the other wrongs in this world. It is not right simply because it is and has been done before.

So each year, when the decision gets made as to whether the edition really needs to go to print, the question is raised again. Is it necessary?

And each year, we get criticism. Sure, women have social, mental and physical problems unique to them. But like, so do men, you know? Why aren’t you doing a men’s edition? One comment left the On Dit Facebook page read ‘Doesn’t seem like equali-dit to me’ (like all good puns, this one only makes sense if you pronounce On Dit correctly as ‘on dee’). Emails described us as variously ‘dated and irrational’, ‘gender-discriminatory’ and ‘EVIL’.

It’s a fact long noted that you can spend as much time defending the need for a women’s space as there ever was in the space itself. As the editors of the Women’s Honi wrote in their editorial, ‘Whether it’s because outrage and confrontation sells newspapers, or because sexist attitudes still pervade our collective imagination, we are too busy hearing about the outraged backlash to give time to the real injustices.’

They decided, when faced with criticism of the edition, that responding to it ‘would be an unequivocal waste of space’. At On Dit, we did the same. Instead of explaining why we’d decided to make another edition of Elle Dit, we let the voices of the women inside do the talking.

But considering it, it seems that the decision making process highlights an interesting perspective on practicing feminism.

Student media is the small, strange cousin of the mainstream media. And in mainstream media, magazines are a women’s sport. Women read all of the damn magazines. No really, the three top selling magazines in this country are The Australian Women’s Weekly, Woman’s Day and Better Homes & Gardens. All three magazines have women as editors-in-chief.

So weirdly, magazines seem to be marked out as territory inhabited by women.

It’s not a particularly forward thinking, or feminist, territory, sure. In fact, a lot of these magazines promote some very old fashioned ideals about the role of women both within their families and in the workplace. It is, however, very much a women’s space.

And yet, when it comes to the media at large, it’s not so nice a picture. No woman currently edits a major daily newspaper in this country. If you’re looking for a depressing read, New Matilda put together some of the stats. Geoffrey Barker’s column for Sydney Morning Herald this month (pert! perky! breasts!) pretty clearly demonstrated the hostility of the old media towards women.

For that matter, when it comes to the world at large, it’s not so nice a picture. The wage-gap still exists, and in this country, is growing. Sexual assault and domestic violence are still predominant in our society. So providing space for discussion of these issues sounds reasonable, yes?

But that brings us back to the argument that men face issues too, and we’re not providing exclusive space for them. The magazine effectively represents affirmative action.

Affirmative action is divisive, even among feminists. Is the fact that a woman will receive less space, everywhere else she goes, enough to justify having extra space exclusively provided to them here? Every other edition of the magazine contains articles on both men and women’s issues. It’s just that one that doesn’t.

In my view, we simply have a problem in this society that men’s voices outweigh women’s. The power in the women’s edition is that it speaks directly to voice. We published and distributed the exact same number of magazines without a male voice in sight. It may not have been a large number of magazines – certainly, student media isn’t going to change the national discourse any time soon – but it’s something.

In the same way that having a women’s only meeting of a feminist group isn’t excluding them from the discussion of gender issues, neither is having a women’s issue ignoring the issues or voices of men. As Charles Johnson wrote at radgeek.com, ‘decades of pervasive psychological conditioning will still cause women to react defensively to the presence of men’. In other words, there are still some things, be it sexual or physical violence, that women are far less likely to speak about honestly in the presence of men. While a women’s magazine doesn’t prevent interaction from men, reading or writing letters in, it does provide a protective community around the writers. It also creates a community from the wider population of the university, simply by focusing on those issues.

A good women’s edition reflects cultural and social diversity. It reflects intersecting oppressions. It doesn’t aim to solve alloftheproblems,rightnow. It aims to give space and facilitate the conversations that need to occur.

It’d be cool if, one day, the editors of all these magazines looked around and thought, ‘huh. I don’t think we need a women’s edition this year’ and did so because feminism had succeeded and equality had been achieved. The decision to make Elle Dit, and others like it, is not always a happy one.

And yet, the simple message that stopping a women’s edition gives is that ‘we’ve solved that problem’. Frankly, we haven’t come close.

4 thoughts on “why we need ‘women only’ spaces”