Women and tattoos: the role of ink in bodily control 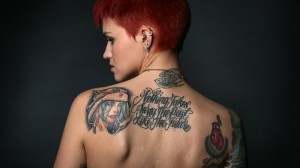 Many women use tattoos to indicate ownership of their bodies. Tattoos became a symbol of rebellion for women in the 1970s, amidst the fight for abortion and contraceptive rights. While tattoos apparently had a brief popularity amongst Victorian women, they have predominantly been a male arena since their introduction in Western culture into the 1700s. This changed in the 20th century, as feminists struggling against a patriarchal order that sought to maintain power over their bodies used ink to show that ultimately, they were in control. Tattoos grew in popularity across the decades and are now an element of mainstream culture but to many, tattoos remain a symbol of autonomy. The irony is that tattooed women are also victims of public consumption and discussion and are frequently finding their personal space invaded because of the ink in their skin.

The rise in popularity and accessibility of tattoos and their mainstream acceptance are inextricably linked. Tattoo studios are found across cities all over the world, and the internet is filled with the images of the beautiful and bizarre artwork people have chosen for themselves.

Where tattoos were once the marker of ruffians and the dregs of society, they are now found on people of all backgrounds and professions. The changing attitudes to tattoos are also reflected in the nature of the art; there has been a definite movement in Western culture towards the creation of tattoos as pieces of art that complement the body, rather than simply decorate it. The flash tattoos of yesteryear, such as anchors, skulls, and roses remain popular, but are usually chosen as an ironic statement by those wishing to recreate the bad-arsery of sailors and crims.

More and more young women are choosing to get tattoos. Last year, for the first time ever, more women than men got inked in the States (20% to 19%, according to a 2012 Harris poll. Unfortunately for Australia, most online tattoo statistics relate to drug use). For many women across the world, tattoos are a show of personal strength. As Lena Dunham’s character on the show Girls explains, her tattoos came as a response to weight gain and the desire for control that arose from that experience.

Margaret Cho similarly equated tattoos with a complicated relationship with her body. In a recent article published on Jezebel she wrote: ‘My tattoos represent much of the pain and suffering I have endured. They are part of me, just like my scars, my fat, my eternal struggle with gravity.’

Cho’s article summarises the ongoing problem that inked women face. At a visit to a Korean spa in LA, she was stripped of the right to feel comfortable in her own body because she is a heavily tattooed woman. She was given ‘heavy duty Korean woman stinkeye’ as she moved about the spa, and was eventually asked to cover up by a very uncomfortable manager. She wrote: ‘Their intolerance viewing my nakedness – as if it was some kind of an assault on their senses, like my ass was a weapon – made me furious in a way I can’t really even express with words – and that for me is quite impressive…I deserve to be naked if I want to.’

Although Cho’s experience may seem culturally specific, it is representative of the loss of autonomy that tattooed women of all backgrounds experience. Many tattooed writers and bloggers have reflected on the way tattoos seem to act as an invitation to comment on, or even touch, someone else’s body. One writer who described herself as ‘someone who gets read as a fat woman who often dresses pretty femme’ observed ‘The routine violations of personal space most women are familiar with magnify tenfold when you have ink on your body, whether you’re talking about casual evaluations of your physical merits (“that would look better on someone skinnier”) or people who think it’s perfectly fine to reach out and touch you, like you’re a jacket on display at the clothing store.’

The commentator also detailed the way a stranger changes their attitude when a woman’s tattoo is uncovered. Women are not only seen as more threatening (perhaps harking to a traditional association of tattoos with the lower classes) but as more promiscuous and eligible for judgment.

Thankfully, my own experience as a tattooed woman has not been so difficult. At present, my only tattoo is not visible to the general public and so rarely attracts commentary. If I mention that I have a tattoo, people ask to see it, but this interest is more artistic than voyeuristic. If I am in a situation where people are talking about “people who have tattoos” (because we’re such a unified bunch), I don’t usually talk about mine. Like Cho’s and Dunham’s, my tattoo is personal, and I don’t feel the need to defend it. My next tattoo will be more of a visible piece of art, and while I admit I am occasionally nervous about what reactions it will attract, I won’t be deterred.

Despite the occurrence of negative responses to tattoos, they remain a source of pride and strength for many women. Some breast cancer survivors get tattoos on their chests, either to cover scars or to celebrate their bodies. Many women I know started small and discreet with their tattoos, and then expanded them into more visible areas as time passed. Tattoos frequently become something of a project of love. They can tell a story, or simply represent the beauty of an image. There are members of the community who continue to judge women (and men) with tattoos, but as time passes, more and more people will come to see ink as a mark of individuality.

7 thoughts on “Women and tattoos: the role of ink in bodily control”