biblezines: questioning the appropriateness of religious education in public schools 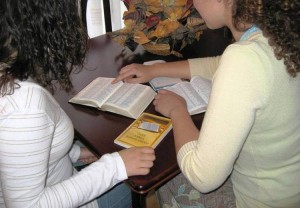 Religious and Christian education for both primary and secondary school-aged children has always been a provocative subject for debate, often with strong arguments for both its necessity as a compulsory school subject, for it being a matter of individual and familial faith, or being better off outside of the classroom. However, following a recent publication distributed to graduating year six students at Torquay College, both parents and teachers have called for an overhaul of religious education in schools.

The students were presented with ‘Biblezines’ following their completion of their Christian education program, run by Access Ministries, the government accredited provider of religious instruction in Victorian schools. The magazines were entitled Refuel 2 and Revolve 2, and intersperse the text of the New Testament with dating advice, beauty tips and music reviews.

As if it doesn’t sound dubious enough, a sample of the ‘advice’ issued to female students (aged 11 to 13 years) includes a warning to girls not to go bra-less because ‘your nipples are much more noticeable and a distraction and temptation for men,’ and advising them not to wear tube tops and low-rise jeans because men are ‘sexually stimulated by what they see.’

‘The Bible says not to cause anyone else to sin. Are you putting sexual thoughts about your body into guys’ heads? If you are showing a lot of skin you probably are,’ the publication also states.

The material is produced by the News-Corp owned Nelson Bibles, America’s largest Christian publishing house. Along with its shocking endorsement of rape culture and victim blaming, it also ‘exposes the lie of safe sex’ by claiming that condoms condone promiscuity, and also urges those who think they are gay not to act upon it.

‘I think it’s wrong that anyone should come in and distribute proselytising material, which goes against Department of Education policy. For this to be given out to children by a person who is in a position of authority in their lives, like a religious education teacher, is a travesty,’ Naja Voorhoeve has stated, after her seven-year-old son was given the Biblezine by an older student, and found it to be shockingly offensive.

This follows the news from Fairfax Media last week that hundreds of Victorian principals in primary schools have stopped weekly religious education classes. In the past two years the number of schools delivering ‘special religious instruction’ fell from 940 to 666 (ironic as that number is, it is also important to note the significant drop).

Access Ministries says that it did not approve the Biblezines, or their content, and that they were a graduation gift from the local churches, who usually donate traditional bibles. In a statement released by chief executive Evonne Paddison, it was stated that ‘our agreed curriculum teaches the basic beliefs of the Christian faith and does not stray into areas of sexuality at all. We are extremely disappointed that this has occurred and will continue to investigate how it happened.’

Torquay College principal Pam Kinsman has received an apology from Access Ministries and has stated that ‘we have a strong focus on diversity and respect at our school and as soon as the content of the text was brought to my attention, I immediately said that book will never be distributed again to our students.’ A spokesperson for the Education Department added that the materials were ‘totally inappropriate and offensive’, and that the department was further investigating the matter alongside Principal Kinsman.

Joe Kelly, principal of Cranbourne South Primary School, who last week spoke about this issue, as well as how he has not allowed Access Ministries into his classrooms since 2012, has summarised this story well – ‘This kind of material is disgraceful and this is why I strongly call upon the Education Department to investigate an immediate review of the practices of special religious instruction [SRI] providers with a view to having SRI taken out of our great public schools…Our young people are going through the most sensitive period of their development – they don’t need to be preached to, they need factual information and a sympathetic ear on the part of caring adults, not people who are going to moralise and judge their behaviour.’

What do you think, Lipsters?
Does religious teaching have a place in public schools? Or should it be left up to familial faith?
Share your views with us in the comments!