creating yourself: an interview with jill jolliffe 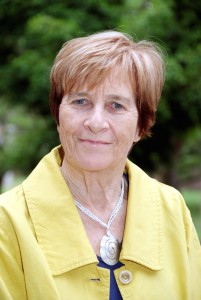 ‘In 1982 I reported on fighting between Polisario Front guerrillas and Moroccan troops in the Western Sahara, and in 1988 had an adrenaline-drenched experience when caught in a South African artillery attack, during Angola’s battle of Cuito Cuanavale.’

This is Jill Jolliffe, writing in Finding Santana, her book about travelling to meet an East Timorese guerrilla leader. A veteran foreign correspondent who has worked across the globe for Reuters, The Guardian, the BBC and Sydney Morning Herald, Jill is brave. The sort of brave some people call crazy.

With seven nonfiction books and several TV documentaries under her belt, Jill’s collection of terrifying scenes could fill a library. Repeatedly, she has put her safety at risk in order to uncover ugly truths. She was present when Indonesian troops stormed East Timor in 1975; travelled undercover across the archipelago, and uncovered the now prolific murders of five Australian journalists (her book on this being the basis for 2009 film Balibo).

And that’s only within two countries.

In person, Jill is similar to her writing style: pragmatic with an even warmth. Her stories, especially those from the beginning of her career, speak to me. As a young writer, I need some of that determination; I need to take some risks.

Illustrator Austin Kleon writes, ‘Forget discovering yourself. Create yourself.’ And that’s exactly what Jill did.

‘In 1975,’ Jill says of her introduction to this life, ‘There was a civil war in Portuguese Timor – the Portuguese decolonisation set it off. Following a revolution in Portugal in 1974, its new leaders announced they would withdraw from the country’s far-flung African and Asian colonies. In Timor this triggered a civil war between Timorese factions, paving the way for a long-planned takeover by Indonesia.’

An activist at university, Jill was a speaker at a Vietnamese moratorium in Melbourne. Despite her limited experience she didn’t wait for a big break or anyone’s permission; she jumped on a plane.

Jill joined an Australian delegate on a 48-hour visit to Timor, and as the team were preparing to board their return flight she announced she was staying on. Alone in a foreign country, and with little professional experience, she began work as a foreign correspondent.

Beginning is always the hardest step. At the beginning of my career, it’s easy for me to balance on the precipice of my own inexperience, frozen by my lack of knowledge.

Jill wasn’t frozen. With a little luck, she got the opportunity to work for one of the largest news organisations in the world.

‘When I got to Timor, and I made the statement that I wasn’t coming back, this guy from Reuters offered me this job.’

After securing work with Reuters, Jill reached out to a friend who worked for The Times in London. He passed on copies of his articles in exchange for her knowledge and contacts in Dili. Copying his style and structure, Jill learnt the process of newswriting.

‘I had to write these stories that were very short, and tell the world an enormous amount in such a small space. It was the best discipline a young writer could have.’

Jill stayed in East Timor for three months and faced a steep learning curve. One of the daily obstacles of a reporting was using outdated technology (even for 1975!)

‘I had to race every day to meet the radio line that was open to a telecommunications post in Darwin. They used the Marconi system. So you needed to send your stories to Darwin and you had to send them by Morse Code.’

And I feel frustrated when my keyboard freezes.

Volatile technology isn’t the only hurdling block for young writers: hundreds of bloggers have written about daily fear. One must learn to silence the Whisper of Not Being Good Enough early on. A foreign correspondent, however, often has no time for these indulgences when instead she is fearing for her life.

Jill is casual when speaking about her 1994 capture by the Indonesian government. In a dark night of pursuit by the secret police, she and a companion ran and hid. ‘We were lying in a ditch all night, and I looked up and we were surrounded.’

She knew what kind of danger she was in after years of reporting on human rights atrocities committed by Indonesian forces. Electric shocks. Fingernails pulled out with pliers. Beatings.

‘Oh, they hated me because I knew too much about Indonesia and about East Timor – they didn’t want any witnesses.’

Aware of the very real threat of rape and execution, Jill displayed her typical resourcefulness and politely demanded her captors allow her to call the Australian ambassador. She was expelled from East Timor unharmed.

In Finding Santana, Jill writes about the ongoing anxiety of avoiding capture when entering Sumatra via ferry:

‘Somehow I went through the motions, achieving external calm, but could not control a visibly trembling hand while giving my passport over the counter.’ While inner fear is a constant theme of her text, not once did Jill turn back.

Learning from this veteran, I now have somewhat of an instruction manual. Create yourself. Start writing. And be crazy brave.

Jill’s memoir Run For Your Life, will be published by Affirm Press in mid-2014.

11 thoughts on “creating yourself: an interview with jill jolliffe”