does nigella lawson think women’s distaste for the kitchen is the fault of feminism? 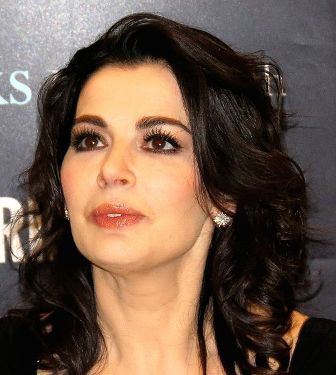 I was asked to write a response to this article regarding the celebrity cook, writer and journalist Nigella Lawson’s possible anti-feminist heresy a couple of days ago, but as I sat down tonight to get stuck in to it, this fresh one popped up in Google, by the one and the same Laura Cox, both for the Daily Mail. This second fluff piece regards Lawson’s donning a suit for a photoshoot – and that’s about it really. The focus of the two articles sat side-by-side makes Cox look very silly indeed. The first paints Lawson as claiming that cooking is ruining feminism by virtue of a couple of badly-ripped quotes from this recent interview in the Guardian, where Lawson clearly intimates that her feminist ideology should be self-evident. Cox attempts to twist each word in the hope of getting some semblance of a negative news story, but all she really manages is to make it seem as though her basic comprehension levels are rather lacking. As Lawson herself explains, ‘When I wrote How to Be A Domestic Goddess, many felt I was saying that women’s place was in the kitchen, but the ironic pictures on the end papers [showing a Fifties housewife] surely undermined that, except for those people who consciously chose to misread my intent.’

In Cox’s second article, appearing only a day later, Lawson is then lambasted as having a ‘shocking new image’ after the release of press images for the Observer Food Monthly Awards Chef of the Decade Award. Ten chefs were nominated for the honour, and incredibly, Lawson was the only woman deemed worthy of the line-up. In response, she posed in press images in a tux and bow tie, with her hair pinned, sporting a casually confident demeanour one associates readily with smug male celebrities. The tiny smile playing on the corner of her mouth says it all really. That Lawson chose to adopt this attitude, rather than presenting herself as sensual and feminine, as is her normal TV personality shtick, is quite important.

Cox’s reaction is also important. Her unwillingness to view either Lawson’s direct quotes or her playfully political jab at the Observer as feminist actions is rather bizarre. Why do you think Cox did this? She barely hides her disappointment, lamenting, ‘It is a marked change from how we are used to seeing the cookbook author, who is better known for wearing feminine dresses that flatter her hourglass figure and magnificent cleavage. Instead the boxy jacket hid the shape she normally celebrates.’

There is barely a mention of Lawson’s talents or achievements, yet no less than three mentions of her impending divorce to Charles Saatchi, and of course, the revolting incident that I will not go into here. I continue to be shocked at how often female journalists play in to the media’s subtle yet routine denigration of women. Especially when those women have built strong, dedicated careers that are centred around elevating the status of women, their work and their passions, as Lawson has done. So why are articles like Cox’s so run of the mill? Is it desperation not to err too far from the status quo? That median point being of course, middle aged white conservative male opinion. Or perhaps it’s a more private, darker issue of knowing how difficult it is to succeed as the underdog – that is, as a woman – in a society where men remain king, journalists like Cox believe they need to denigrate other women who’ve reached the top in order to retain their own loosely held position under the spotlight. Or maybe the lads who run the papers have a bit of the giggle at the end of the day, knowing the pressure their women writers are under to write for a male readership who loves nothing more than a good bitch fight.

For whatever reason it occurred, it shouldn’t have, so I’ll write the article that should have been:

Nigella Lawson, who wrote her first cookbook ‘to memorialise the cooking of (her) mother and one of (her) sisters, both of whom died young,’ has proven yet again how strong-willed she is in the face of adversity, by being the only woman from a group of ten nominees for the Observer Food Monthly Awards Chef of the Decade Award. The self-proclaimed feminist cook did not attempt to hide her disappointment at the gross under-representation of women in the line-up. She could have been bitter, yet she was clever instead – she responded by using the one thing that now set her apart from the competition and was guaranteed to get the media’s attention: her body.

Dressed in a smart tux for press photos, with pinned-back hair and understated make-up, Lawson drew attention to the sexual inequality inherent in the judging process without causing undue embarrassment to the Award’s organisers – no mean feat. For such a public competition, in which there are so many fantastic women in the field to be so obviously biased towards male chefs is quite shocking, really. But back to the wonder of Lawson.

To think she has only recently sought to end her marriage to the physically and verbally abusive Charles Saatchi, yet still has the courage to publicly challenge prescribed gender roles and inequality in the workplace – even if that workplace happens to be the public media – is absolutely incredible. I don’t think many could possibly understand the humiliation that the egocentric Saatchi must have put her through, and I have the utmost admiration and respect for the way Lawson has avoided a media circus, and instead chosen to take the higher road by bringing the focus firmly back to her food and her politics. I sincerely hope she continues to go from strength to strength, as we need more women in focus who are not afraid to challenge prescribed ideas on what women should look like, sound like, or cook like.

One thought on “does nigella lawson think women’s distaste for the kitchen is the fault of feminism?”