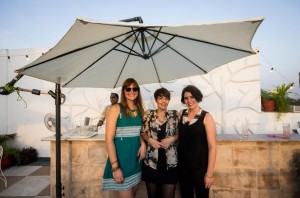 1000 Pound Bend on Lonsdale Street in Melbourne’s CBD is packed when I arrive to chat to Fiona and Sharna of The Fabric Social, a startup born from the feminist peace movement that is currently doing the rounds on crowdfunding site, Pozible. In the backroom of the café, the opening night of the Emerging Writer’s Festival is due to take place later in the evening. Although The Fabric Social has nothing to do with the festival, the vibe created by a room full of young, passionate creative types seems quite fitting. Sitting in the small, box-like ‘cigerette room’, fairy lights twinkling over our heads, I chat to Fi and Sharna about the project, their feminist beginnings and the gap that needs to be bridged in order for conflict-affected woman to be fully supported.

When we speak about war and conflict, it is rare that we touch extensively on how woman are affected. In places around the word where woman don’t play a combative role, we sometimes forget that they suffer from the by-products of war. A report on GSDRC looking at life in conflict-affected areas discusses the fact that women become the heads of households during wars and that after the deaths of family members, considerable pressure is placed on them to rebuild local economies and communities. ‘Woman affected by conflict, they’ve all lost a loved one who is usually the breadwinner’, explains Fi.  ‘We’ll train them [in marketable skills] but the next step isn’t there, which is that no one else has any expendable income to buy what they’re selling because everyone else is living in a conflict area too.’

Both Fi and Sharna (as well as Katie, the third face behind the project, who is currently overseas) have spent years doing incredibly hands-on work in women’s organisations all over the world. They tell me that the three of them met in Delhi, where Fi and Sharna were working on designing humanitarian programs, when they first noticed what was to be one of the building blocks of The Fabric Social. ‘They have these beautiful co-ops based on mutual support and mutual benefits’, says Sharna. ‘But they set up and then they [the woman] can’t sell what they make for a livable wage. They sell and then they make maybe a dollar.’ The Fabric Social is directly targeting this issue, with an online store and an app developed to allow these women to sell their handmade goods – often their only form of income – to international consumers. The two elements of the project are their tailoring patterns and the smartphone app, Fi tells me. ‘Our tailoring patterns are being developed by our Dutch designer, who is making really wearable, simple pieces that women in the field can create using traditional methods and the app enables them to sell the pieces to international markets’.

For both Sharna and Fi, The Fabric Social comes off the back of years as fully engaged feminists, incredibly active in the movement. However, they both have different stories to tell. Fi tells me that she’s always had ‘feminist bones’, owing to a mother and grandmother who were big on the. Her first big push came from being encouraged to get involved with W.I.L.P.F, which is the Woman’s International League for Peace and Freedom. ‘I got invited to a UN conference because they had a youth quota. This is an organization that is mostly made up of older women and they didn’t know any young people.’ She fondly remembers jumping at the chance to participate, because she was ’19 and studying development’. On the other hand, Sharna came across feminism all on her own, citing her small rural town and a lower-middle class background as reasons she didn’t identify with feminism until after her undergrad. ‘I was a keen intellectual though. I wanted radical social change. I kind of developed this and started looking at how conflict affects women and the structures of power that come with this patriarchal ideology.’ It was a small step from there to the feminist peace movement and both women recall how they were welcome with open arms. Feminism is experiencing resurgence among young people, with social media connecting people in a way that allows for increased activism. ‘Once you get involved, you realise we’re all over the place, we’re pretty powerful and we’re using technology in a way that’s very international’ says Fi of youth activism. ‘Once you’re in, you don’t leave, because it’s too heartening.’

The conversation rolls around to one of the cornerstones of The Fabric Social, ethical fashion, of which the two have a lot to say. They tell me they want to achieve fashion that’s not just ethical, but also accessible, because they believe the current market doesn’t provide that accessibility. High prices are shutting young people out of the market, which Sharna tells me is absurd. ‘If you’re against this whole capitalist system that eats people alive but you can’t afford to buy something that was produced ethically, then the system kind of perpetuates itself.’ Fi relates it to their own experience as consumers of ethical fashion. ‘We buy it when we can, but either of us can afford to be buying $80 shirts and $200 dresses. We think young people in their 20s and 30s who have expendable income would like to buy ethical fashion, but don’t really have options.’ Sharna cites the 2012 factory fire in Bangladesh that killed 112 people, as a reason there is a renewed interest in purchasing clothing made ethically, explaining that the tragedy reminded people where their clothes come from and reignited a desire to wear clothes without ‘blood on their hands’. This push for a more easy-on-the-conscious, sustainable retail options is surely one of the contributing factors to why the project has attracted so much positive, enthusiastic attention, especially in a place like Melbourne, a city once dubbed by Senator Christine Milne as the ‘Green’s heartland of Australia’.

Near the end of our conversation, Sharna worries that they’ve been providing me with answers that are too long winded. I tell her that isn’t the case, as what they’re doing is too important not to have lengthy conversations about. The two reflect on the direction feminism is taking and how in Australia, the dialogue is largely about what misogyny looks like and domestic issues (‘having it all’, quips Fi). That’s why they think it’s important that those dedicated to improving the quality of life for woman in developing countries have a platform and support. ‘Radical social change, that’s what feminism is supposed to be about’ Sharna says. ‘What we want people to realise is that there are small business run by women for women in some of the most dangerous parts of the world doing the most radical thing you can do, which is just getting out there and getting things done. And you can support them.’ The response to The Fabric Social so far has been incredibly positive, which isn’t surprising, as the project’s three elements of digital technology, ethical clothing and having a direct monetary impact on developing communities are ideas the public engages with. Once the Pozible campaign is complete, Sharna will join Katie in India, where they’ll negotiate the relationships that will be necessary to get The Fabric Social off the ground.  The negotiations will be sensitive, as there are often men sitting behind these organisations, adverse to change and it won’t always be an easy sell.  However, the two are buoyed by the public’s enthusiasm and ready to start affecting real, positive change in this brave new world of digital social enterprise.

Sharna, Fi and Katie are currently in the running for $40,000 from PayPal as part of their ‘People-Powered Project’ comp. You can help out The Fabric Social by voting here!