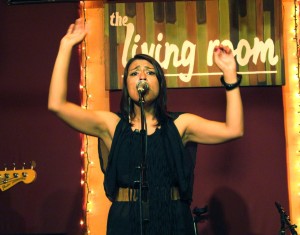 On June 7, Inuk pop songstress Elisapie Issac released her album There Will Be Stars in the US. That same day, I was lucky enough to have a phone interview with her.

I’ve gotta be honest – as someone who has done a fair share of interviews, I’ve never had one go as well as the one with Elisapie did. I assumed that her being trilingual and us having the conversation over the phone might present some difficulties, but in the end it couldn’t have worked more perfectly. She had well thought out, honest answers for every question I asked her in our short thirty minutes.

Explain your artistic process – do you write first, or start with melody?
I wouldn’t say I am a songwriter per se, it [There Will Be Stars] was an experiment for me in a way because before [in previous band, Tamia], we were in a duo. I would come up with melody. I am really instinctive, anything that’s musical starts with my voice, with a melody that I find. I use the guitar to find melodies, but it’s still very new for me. I start with music, melody first, which provokes something – an emotion, a line – then I start writing.

When you’re writing a song, do you have a main idea in mind?
It’s weird, because I realize the center of all the songs is this young woman who is from the North who has traveled South, someone who speaks her mind but remains feminine. I like to go around these kind of issues that touch me, from a love song to a standup pop song.

Do you write in English, French, Inuit or all three?
I write in all of them. Since I’m a little girl, my pop folk records are in English because we didn’t have a lot of musicians who wrote in Inuit. First instinct is always English, because it’s always universal or international, from Elvis to the Beatles, to all the songs we know, are always in English. Even for the Inuit. First thing that comes is English lyrics, then what I love to do is to have fun with my language musically, it’s important for me to continue that in my sound in my poetry. French is hard, strict, but so romantic at the same time. There’s a lot of love for that language. It’s usually very, very personal. Quebec and Montreal are culturally very interested in what I do. I feel like I need to raise my voice in my culture in a poetic way.

Do you play your own instruments?
I decided that I am not going to challenge myself with that, I just sing I have two musicians who I travel with. We’re three on stage, but I feel like I have a larger backing sound because they are multi-disciplinary. The live show is a little less arranged than the album, but we work hard to maximize the instruments with two musicians. It’s a lot of fun.

Who have been the biggest influences on your sound?
Musically, nothing new for anyone: Bob Dylan and Neil Young. They represented the time so well, for me those were the times when things were changing in my culture. My uncle was in a rock band, definitely inspired by Elvis and folk rock. For me, it’s totally Bob Dylan. I wish I could say someone different, but it’s him.

How has it been to shift from performing in the duo (Tamia) to performing solo?
It was definitely different, it took me a while to assume all this and to accept that it was how it was going to be, but it became something that freed me. I learned a lot about myself, about who I am and what I like, because before I was always open to others’ ideas. My producer wanted me, 100% me, he wanted to have the most of me and challenged me that way. I was really involved in doing this album. It’s been great, I’m loving it.

What do you want people to come away with from your live shows?
I think it’s always different for new crowds who have no idea what I do, my background, where I’m from. I guess I want them to feel like they can relate to me somehow, even if they know I am from somewhere very far away. At the same time, I want them to feel they’re on the voyage with me, to be able to feel the sense of human connection, and music is so powerful, there’s always a bigger dimension there. I know there are musicians who don’t even care, they just go and get you with their music, but I guess with me, because of background or culture I feel like I have to share. I feel that I am connected to whoever. That mystery is something that I like to keep, it’s good to make people wonder.

Especially with music, media and the internet has become such a prominent vehicle for getting exposure. Do you see that as something beneficial or something that you prefer to move back from?
Oh I am totally into the internet. Before, I was the last person to go on Facebook, I did not care. But I realized how powerful it is – we need it with the music industry going down, it helps us make a living. I think it’s really, really a big tool that is amazing for us. I have nothing bad to say about the internet. Especially with young people up North now, they’re less isolated. It’s great.

What do you do when you’re not playing music?
It’s been a year and a half where I’ve been going nonstop, so I want to live in Montreal, just wonder around this great city, its little cafes and music stores, hang out with my friends. I am really social, I haven’t done a lot of socializing because I always have to be somewhere, so in those moments of free time I just want to chill.

What’s the first gig and best gig you’ve ever been to?
Of course, it’s going to be Arcade Fire, before the hype. We were just blown away. We were at this theater, at the Corona Theater in Montreal, and it felt like we just got hit by lightning. That’s a show I won’t forget. And also, Paul McCartney in Quebec City Outdoors – my brother was there, he is a big Beatles fan, he was giving me an education on how they wrote the songs, etc. I don’t even remember the first band I’ve ever seen – it was my uncle’s band.

Do you consider yourself a feminist, and if so, in what way?
It’s so weird, because I was saying “I am not a feminist, but I’m just a woman.” But nowadays you have no choice but to be a feminist. Even men are feminists now. I was speaking to a friend of mine who is a punk musician and he was saying “hey, guys, men, don’t ever say you’re not a feminist. We’re here for the women”. I am feminist in a very feminine way, because it’s the power we have. It’s about bringing out what’s strong in women. If we could change the concept of feminism to make it more feminine, it will be even more powerful and beautiful. It’s an attachment to beauty and strength. I feel I would have not have been as happy if I were born a man. Really, I do. We should all show it and we should all embrace it. Especially with what I do, it’s a big part of the music I create.

What are you most excited for, in terms of what’s coming up? Are you planning a tour in support of There Will Be Stars?
I have a lot of touring right after tomorrow. It’s going to be crazy, a lot of stuff in Montreal and in a Canadian pop festival. I am really excited, I am really curious to see what the reaction will be. One more thing I’ve appreciated is doing our interview, people seem interested in music. It’s a positive thing, a surprise gift, to have people so curious.

Last question. Where’s your favorite place to perform?
I like little places. We’ve done a lot of touring in the Quebec region, in little venues. Now lately we’ve done these chill venues, and it’s just so much fun. The smaller it is, the greater it is for us. That’s the kind of musicians we are. It’s nice to do outdoors too. Smaller stages, totally amazing experience each time.

And, faithful lip readers, the fun doesn’t stop there!

The next night, I caught her album release show at The Living Room, one of New York City’s most favored Lower East Side venues. The same honesty and positivity I felt during our phone conversation translated beautifully onstage. The audience was varied, and the journalists, promoters and fans loved the mix of her personal stories behind each song and perfect technical performances. While a lot of people there were not aware of Elisapie’s unique history, she connected with everyone at the showcase because it is impossible to not completely enjoy someone as talented and passionate as she is. She had some great support from her two backing multi-instrumental musicians and was able to really fill the whole room with the charming mix of pop, rock and jazz on There Will Be Stars. Everyone left the show with an understanding that Elisapie is just as irresistible as her music is.

One thought on “featured artist: elisapie”