Feminism isn’t the only word up for debate 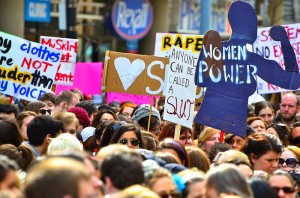 The short-lived meme, ‘Is this feminist?’ was perfect for two reasons: 1) it proved the feminists can have a sense of humour about themselves, despite what a vocal minority might think and 2) like Community’s Britta Perry, it managed to parody of third-wave, feminism without relying on lazy and misogynist stereotypes. That is, the academic, overly critical, buzz-killing feminist at the front of the class, slowly raising their hand to declare something ‘problematic.’ I’ll admit to using the word as a crutch whenever something seems wrong but essentially harmless, or when I think I should have an opinion about a specific issue but can’t articulate it.

I thought of the meme a few weeks ago after a well-intentioned radio debate on Q with Jian Ghomeshi asked if the term ‘rape culture’ was still useful. He wanted to know if a new term was needed to deal with rape on college campuses, the ambivalence of the justice system in prosecuting the crimes and investigating allegations, advice, cautions, cultural narratives that insist there are ways women can prevent their attacks.

The debate didn’t go as planned. Ghomeshi had invited Lisa Gotell, chair of the women’s and gender studies department at the University of Alberta, and Heather Macdonald, a researcher at the Manhattan Institute, onto the show. But the discussion spiraled into whether there was ‘really’ a problem with sexual assault on campuses, whether it was ‘really’ so wrong to question a woman’s responsibility for her own safety.

Though Ghomeshi tried to get the conversation back on track, it never did and listeners eagerly responded. When the show tweeted about the debate, they were treated to a fresh round of indignation. Why would anyone ever debate rape culture? What was there to dispute? Again: point missed.

The whole mess seemed to highlight Ghomeshi’s concern. ‘Rape culture’ has become a buzzword.  ‘Problematic’ is ubiquitous despite being empty criticism; still, it’s harmless. The familiarity and frequent use of  ‘rape culture,’ on the other hand, is beginning to drown out meaningful discussion. Has it become so common that it’s become heresy to question the term?

I still believe there’s some use to it, in a shorthanded way. As I’ve come to understand and use it: the term refers the institutionalised sexist beliefs and behaviours that frame rape as preventable, women as victims and men as natural threats. (Strange men; never acquaintances.) What Ghomeshi was trying to figure out was if it was an accurate descriptor, a goal better accomplished by journalist Ian Brown shortly after. While the phenomena – for which ‘rape culture’ is an umbrella term – is hard to deny, can we call it a cultural problem? Brown quoted a Rape Abuse and Incest National Network (RAINN) publication that said, ‘Rape is caused not by cultural factors but by the conscious decisions, of a small percentage of the community, to commit a violent crime.’

The validity of the concern was lost on Q audiences partially because  ‘rape culture’ triggers emotional response – and rightfully so. And, thanks to the activists and journalists, it’s a term that’s reached wider public consciousness – even if the issues it describes are still passionately denied or stubbornly ignored. That was the case on Q and, I expect, the more we rely on the term, the more likely it is to go the way of ‘choice’ (which I’ve discussed briefly for lip before) and, more recently, ‘slut-shaming.’

These words are firmly in the feminist lexicon; choice, for one, has been a feminist rallying cry for decades. Yet everyday I see the concept adopted by anti-feminists who frame their ambivalence –and in some cases their prejudice–as a ‘choice.’ Though the word is the cornerstone of most feminist principles and goals, it’s diminished somewhat in the face of arguments that some decisions, which are decidedly anti-woman and anti-equality, are equally valid. Who are feminists, the most vocal champions of choice, to question other women?

More recently, ‘slut-shaming’ has fallen into the same trap. It’s absolutely true that women’s sexuality is policed and judged to an irrational, even dangerous degree. Does that mean being critical of how women’s sexuality is expressed is always misogynist? Rashida Jones asked the same question in an essay for Glamour. She was responding the backlash she received for her hashtag #stopactinglikewhores and criticism of young women in the entertainment industry. ‘I’m not gonna lie. The fact that I was accused of “slut-shaming,” being anti-woman, and judging women’s sex lives crushed me,’ wrote Jones, adding: ‘There is a difference, a key one, between “shaming” and “holding someone accountable.”’

Though I don’t care for the expression ‘acting like whores,’ I understand Jones’s discomfort. I’ve been in the situation myself. Is it slut shaming to object to women ‘experimenting’ for the male gaze? And why, if it’s wrong to criticise Miley Cyrus (a woman owning her sexuality) is it fair to argue, or imply, that Beyoncé is holding women back or being hypocritical, when she talks about feminism while being overtly sexual on stage?

Like ‘rape culture,’ ‘slut shaming’ holds merit and it was certainly helpful when explaining Slutwalk to people who seemed confused about the movement’s goals, but we should be wary of its use. Likewise, the pervasiveness of ‘intersectionality’ is a good thing – and long overdue – but at what point does it stop being a practice and simply become a label activists adopt to guard against criticism from marginalised groups?

If, as we hope, the issues that matter to social justice movements are moving out of activist circles and becoming of larger concern to the public, the rhetoric we choose and the ideas we cling to also need room to grow. Or, we need to be open to the possibility that we’ve outgrown them.