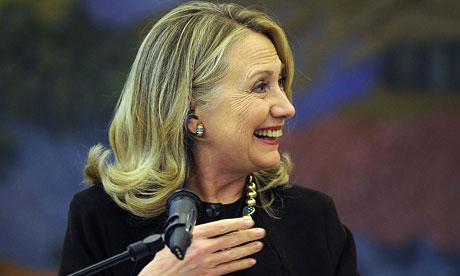 The outgoing US Secretary of State has chatted with ABC journalist Leigh Sales about ending gender discrimination during a final interview in Washington DC. Sales was invited to moderate the ‘townterview’ event after leading a similar forum with Clinton in Melbourne. The event saw questions asked from participants around the globe. Clinton reflected on her broader career objectives as well as her time in the role of Secretary of State, and acknowledged that when it comes to women in politics, double standards still do exist. The end of Clinton’s role as Secretary has spurned rumours of her presidential candidacy for 2016, but no concrete answer as to such intentions has been given.

The rights of women and children have been discussed at length this week as a UN panel meets in Liberia in talks about maintaining commitment to the Millennium Development Goals. UK Prime Minister David Cameron and other senior figures have met in Monrovia this week to focus on the goal of abolishing absolute poverty by 2030. Speakers at proceedings highlighted the links between the safety and empowerment of girls and women and overall national poverty. While all UN member states have agreed to the development goals, the aims are set to expire in 2015.

Tyson, a heavyweight boxer convicted of rape in 1992,  has accepted a role on US crime show Law and Order: Special Victims Unit, causing outrage from viewers and women’s advocates. The program, which deals with the solving of rape and sexual assault crimes, has reportedly filmed the episode with Tyson. A 7,000-strong petition on Change.org appears not to be enough to sway the network NBC away from airing the episode, though the air date has reportedly been altered to avoid coinciding with the eve of a One Billion Rising protest against sexual violence.

US women to be eligible for combat

US Pentagon Defence Secretary Leon Panetta has lifted a prohibition on women serving in combat roles within the United States defence force this week. The Pentagon spoke of the need to remove barriers to capable men and women obtaining service roles, though maintains that women will need to meet the same strength and fitness requirements as men for front line duties. While some are unhappy with the decision, President Barack Obama endorsed the move, saying the military could only grow stronger from the decision. A reported 14% of the military’s active members are female.

Elections aside, J-Gill a hipster

She may have been calling an eight month election lead-up, but it was all fashions on the political field when Julia Gillard stepped out on Wednesday. Prime Minister Gillard sported a new pair of glasses as she announced September 14 as the date of Australia’s next federal election. The move had her berated for everything from being a hipster to a shameless self promoter, but the frames have their own twitter account now. Their first tweet? ‘@KRudd, I’m watching you’.

sexism behind over-investment in cycling infrastructure

queer is the new black