#heforshe: are you buying it? 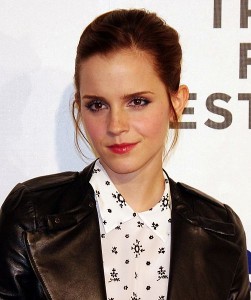 Emma Watson becoming a UN Women Goodwill Ambassador conjured a cheer of “Hooray Hermione!” in my mind. While she has well and truly established herself as a talented actor in roles since the Harry Potter franchise came to an end, she will always be Hermione to me, and I believe Hermione would be cheering Emma Watson right now.

Now if you haven’t listened to her speech launching the #HeForShe campaign, I suggest you go and watch it right now. A call to include men in the conversation for gender equality, the speech has received a great deal of both praise and criticism.

‘It’s no longer enough to demonstrate to men the reality of gender oppression through activism and adult dialogue – now we must “engage” them as one would a child, encouraging them to see how behavioural change will also benefit them.’

Other criticisms of the campaign include a lack of inclusion for those who do not fit into the gender binary, as well as the overwhelming and glaring fact that Emma Watson is a wealthy cis-het white woman. Many women find it intensely frustrating that plenty of women have been trying to get people involved in feminist conversations before Emma Watson, most of them without the backing of celebrity status and white privilege.

‘Ultimately, Watson tells men to join the campaign because men will help themselves, not because their efforts could reduce assault, rape and premature marriage, as well as allow for greater educational and professional opportunities for women.  Given her message, the campaign might as well be called #HeForHe.’

Margaret Johnson believes that the speech by Emma Watson misses some very important factors, and she criticises many of the statements made in the speech, such as: ‘I want men to take up this mantle. So their daughters, sisters and mothers can be free from prejudice.’ Instead of wanting to engage in gender equality simply because women are people, it’s about women’s relation to men. This is not an uncommon complaint when it comes to campaigns about violence against women; namely this 1 is 2 many PSA released by the White House in April this year, which again uses the ‘daughters, sisters, etc.’ line to get men to care about sexual violence against women.

I can completely understand some feminists’ backlash to #HeForShe campaign, and I always encourage people to continue to be critical and to expect more from people who speak publicly about feminism. However, I think that many critics are missing the most important thing to come from Emma Watson’s speech: she has started a conversation.

Something I believe to be an issue with getting people to talk about feminism is communication. While to many feminists, Watson’s speech missed critical points and was simplistic and watered down, this speech was not aimed at feminists. This speech is for everyone else. It’s for the people confused about feminism, questioning its validity and seeking relevance. I understand that Emma Watson is a white, privileged celebrity, but many of us outspoken feminists do not have the podium that she does to stand on and start a discussion, and it is fantastic that she is using the podium available to her to start a conversation about gender equality.

In a follow up from the #HeForShe campaign, Iceland has recently announced that they will be hosting a conference on Gender Equality, nicknamed the ‘Barbershop conference’, to which only men were originally to be invited. They have just stated, after receiving a large amount of criticism, that women would be included, but that the primary focus would be engaging young boys and men in the topic of gender equality, and women would still be excluded from some portions of the conference. Huh.

Iceland, being ranked Number 1 globally by the Global Gender Gap Report 2013 compiled by the World Economic Forum for gender equality in economic, health and other matters, is a shining beacon of what a country focused on gender equality looks like. So it comes off as odd that they would be hosting a conference about gender equality that excludes women. Men have been making decisions regarding women’s issues for centuries, so the idea that excluding women from the conversation would be helpful is a strange and damaging concept.

Andrew Street had the following to say on the topic:

‘…if men want to know something about women’s issues, the best way to do that is not to all go hang out in Iceland, but to maybe – and this is just a suggestion – listen to some actual real live women for a bit.’

It’s important to involve people of all genders to talk about feminism and gender equality, but never to the detriment of women and their voices. The whole reason that gender equality is even an issue is because of the continued inequality that women have in all walks of life, from employment to politics to the ability to simply go about their everyday lives without being constantly reminded of their lack of power and autonomy.

To conclude, some excellent words from Jaclyn Archer:

‘Calling for members of a privileged group to advocate for a less privileged group is not guilting, it is appealing to common humanity. Instead of calling for activists to focus on the issues we want them to focus on, we should recognize the validity of the battle they have chosen to fight, whether we choose to join them in the trenches or not.’

One thought on “#heforshe: are you buying it?”