is being a woman a barrier to becoming a nobel laureate? 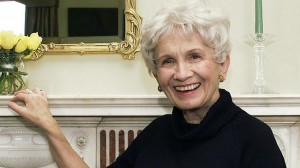 Earlier this week, 82 year old Canadian author Alice Munro was awarded the coveted Nobel Prize for Literature.  Munro was commended by the Nobel Prize Committee for being the ‘master of the short story’, with her tales based around what she calls more ‘every day heroines’ of Canada.

The decision of the Committee has been met widely with a positive response, however, there have been some critics. In particular the author of American Psycho, Brett Easton Ellis, took to Twitter to criticised not only Munro, but the Nobel Prize itself. Despite Ellis’ contrary view, one of the biggest discussion points surrounding Munro’s win is that of female representation amongst Nobel Prize Laureates.

According to the Nobel Prize guidelines, the Prize is awarded annually to an author who has produced ‘in the field of literature the most outstanding work in an ideal direction.’

Despite the strong candidature of female authors around the world, Munro is only the 13th woman to win the Nobel Prize since 1902.  This lack of representation of women amongst the Nobel Laureates for literature has many questioning whether there is sufficient equality in awarding the prize.

The last woman to win in this category was Herta Müller, who was awarded the Prize back in 2009. Munro and Müller join other esteemed writers, the males amongst whom include Ernest Hemingway, Gabriel Garcia Marquez, William Faulkner and even Winston Churchill.

Having said that, it is difficult to claim any prejudice (inherent or otherwise) in the decision making process of the Nobel Prize Committee, as a fifty year seal is placed on all information relating to the nomination process once the prizes have been awarded. However, an analysis of the figures does show a disproportionate amount of men being award the Nobel Prize for Literature over women.

Furthermore, this is not just in relation to the award for literature. The Committee has also drawn criticism over the years for low number of female winners in other prize categories, particularly in the sciences.

Is this a matter of there being purely more men in these professions? I don’t think so. However, I do think there needs to be a concession for the fact that men are still advantaged by being able to reach the higher levels where international accolades may be awarded. As Stephanie Kovalchik at Significance Magazine argues:

‘… [I]t is important to make a distinction between prejudice that keeps women from becoming a candidate for the Nobel and prejudice that prevents female candidates from being chosen for the prize.’

Since its inception, the Nobel Prize has been shrouded in various levels of controversy including claims of politicisation and Eurocentric favouritism.  Other authors (like Ellis) have dismissed the Prize for Literature altogether, rejecting its claim as an international benchmark of literary worth.

So should it matter whether women are adequately represented in this controversial award? I think yes because having more representation in globally recognised forum such as the Nobel Prize can only inspire other women to achieve their goals and strive to greater heights. Similarly, an examination of the criteria behind both nomination and commendation of the Nobel Prize may be in order to ensure that all suitably qualified members of society are recognised and that the integrity of this award is maintained.