lip writer, hannah story, on why we need YOUR help to keep Lip alive 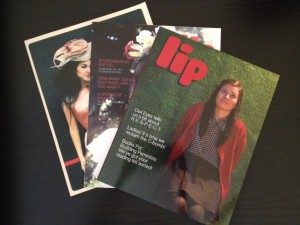 When I was little I was the girl in a white dress with a blue satin sash- at ballet school anyway. I learnt the words to the song and I made it my goal to find out what my favourite things were, so that when I felt bad I could cling to them.

I clung to the wrong things as a teenager: to idealised representations of femininity, to books that I thought would make me look clever, and to people who didn’t share my way of looking at the world. I did manage to find books when I was little. I fell in love with books. They were my favourite things. I became determined to write one. So from the age of five, I started to experiment with form and style, emulating Carroll one day, Capote the next.

At university I discovered cultural studies. Another favourite thing. Cultural studies gave me the theoretical framework to explain my muddled feelings about gender restrictions and the ways in which people interact with and shape the world in which we live. I found Anais Nin, Judith Butler, Marguerite Duras and Helene Cixous. So I began to write more than fiction. I wrote non-fiction and cultural commentaries too- some of which are now published in print and on websites like Lip.

What Lip offers is a space in which to explore 21st century feminism. It’s a place in which women can find other women who think and feel the same things. More importantly, we can find people who think differently to us – who offer a new perspective and can ultimately change the ways in which we think of ourselves and our world. And it’s small shifts in thinking – as urged forward by feminist theory or a good book – that lead to broader societal change.

So maybe you want to support Lip and – by extension – me by donating to the Pozible campaign. The thing about feminism is that it’s only possible when groups of dedicated men and women bandy together.

You can support Lip by donating to our Pozible campaign. We only have 12 days left to raise funds, and if we don’t reach our target of $4,000 we DO NOT RECEIVE ANY FUNDS RAISED SO FAR.