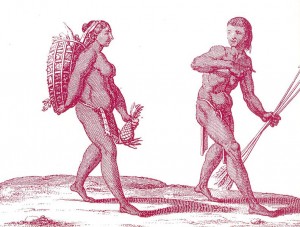 A two-year study of modern day hunter-gatherer societies has dismissed the idea that sexual equality is a new invention, or that it emerged with modernity, instead suggesting that egalitarianism was a norm for early civilisations. The anthropologists leading the discovery have also proposed that these early values are the indirect cause for human cooperation and broad social networks.

Their hypothesis states that this egalitarian system only ended with the emergence of agriculture, approximately 12,000 years ago. The rise of farming, distributed wealth and accumulation of resources led to a division in gender and a prevalently male-dominated society.

The study was established after findings in 2011, which revealed that most members in hunter-gatherer communities are not biological relatives, in spite of members expressing preference towards living with kin. Based on these insights, Mark Dyble and Andrea Migliano, anthropologists from University College London, created a computer-stimulated model to determine why these social structures occur, and how it has impacted on our evolution.

As reported in their study published on Science, the team generated two versions to show the impact of gender-equality on the process of camp structure. In the first model, where the husband and wife had an equal say in who they lived with, members of the camp had a 12% chance of being unrelated to another individual.

This indicated that sexual equality and negotiation results in less chance of living with kin, instead forming a wider social network. ‘While previous researchers have noted the low relatedness of hunter-gather bands, our work offers an explanation as to why this pattern emerges,’ Mark Dyble said. ‘It is not that individuals are not interested in living with kin. Rather, if all individuals seek to live with as many kin as possible, no one ends up living with many kin at all.’

In the second model, when one party makes the sole decision regarding migration, Dyble outlined that the community quickly disintegrates, becoming a ‘dense network of closely related men with the spouses on the periphery’.

The anthropologists used these initial results as the basis for their two-year analysis in the field, researching 11 camps considered extremely similar to the prehistoric hunter-gatherers. The team gathered data on living patterns, familial ties and mobility. The Palanan Agta people in the Philippines and the Mbendjele pygmies in Central Africa were studied, while the Paranan, a male-dominated farming group, was used to serve as a comparison for their findings.

After interviewing hundreds of camp members, the anthropologists found that the division of labour within egalitarian tribes is extremely low, with duties, such as hunting, generally shared between both sexes. The field study confirmed their hypothesis that sexual equality results in a broader social circle, with 17% of the hunter-gatherer tribes being unrelated, compared to only 4% of unrelated non-egalitarian farmers.

As most members had kin in other camps, family ties made it easy to bond and share resources. Andrea Migliano explained that this social structure provided an evolutionary advantage, allowing for a wider network, language expansion and less chance of inbreeding. ‘In forming mainly unrelated camps, hunter-gatherers evolved the capacity to cooperate with unrelated individuals,’ Migliano said. She also added that sex equality suggests ‘a scenario where unique human traits, such as cooperation with unrelated individuals, could have emerged in our evolutionary past’.

Some experts, however, have warned against assuming that sexual equality is the sole reason for human cooperation. Polly Wiessner, anthropologist at the University of Utah, states that the equality in present day hunter-gatherer societies is due to ‘a breakdown of formal structures and cultural rules’. Kim Hill, Anthropologist at Arizona State University, is also hesitant in assuming that this study reflects the behavior of earlier tribes, particularly because many of their social systems have become altered after contact with modern day civilisation.

As indicated in Science Mag, the egalitarianism of our prehistoric ancestors may just be the reason that we flock to help other countries in times of disaster, that we donate money to charities and blood to strangers. While evidence in the past has suggested that gender-equality existed in early civilizations, including hunting, cave art, child-care and travel, this study is a unique development. It highlights that sexual equality was a distinct evolutionary advantage, evolving into a lasting strategy for human cooperation and sharing of resources, which can still be seen to this lasting day.

One thought on “paving the way for human cooperation: gender equality in early societies”