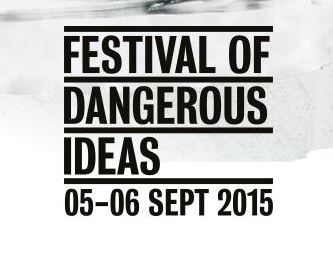 From Capitalism and the Climate to the Twilight of Democracy, the Festival of Dangerous Ideas (FODI) is an annual event that takes place at the Sydney Opera House, pushing the buttons and minds of some of the world’s greatest thinkers. The brainchild of Ideas at the House and the Ethics Centre, FODI is far from just the cerebral circle-jerk it may have garnered a repetition in being; it brings some of the world’s most exciting intellectuals to the Sydney Opera House stages. Whether they are ideas that people have been concerned about since the beginning of time, or ideas on the cusp of our consciousness, they are brought under the microscope for the dissection and investigation of the general public in often humorous and always fascinating presentations.

Taking my personal interest, the 2015 Festival brought to the stage brilliant feminists Laurie Penny, Clementine Ford and Emma Jane in a panel chaired by Julia Baird, discussing the fate of outspoken women on the internet, title ‘Cybersexism’ (a topic that will be of particular interest for Lip readers and writers!). All three women brought up important and thought-provoking issues that generated a slew of incredibly interesting questions from engaged audience members, and covered a range of topics from slut-shaming to random acts of violence: hate mail sent by “concerned members of the public” that have a particularly hard time dealing with feminist ideology on the internet. Clementine Ford spoke passionately about the plight that women face on the Internet, being forced into the persona of the “Instagram model”, yet being blamed for being branded a slut, even when the content she is producing is not even remotely sexual. This is a word that is uniquely used for women, intended to defame and insult women. This segment of the talk motivated me to do some research on slut-shaming across Australia.

Repeatedly, girls and young women across Australia lament the fact that they are encouraged, even expected, to present themselves as sexually knowing and sophisticated, both online and offline. Being “hot” or sexy is part of the recipe of heterosexual femininity. But with one false step, it’s easy to cross the invisible and ever-shifting boundary between “sexy” and “slutty.” If she is perceived as “too” sexy; if she calls too much attention to her sexiness; if she lacks the studied nonchalance that is compulsory to pull off the sexy-but-not-slutty performance, she faces a real risk of becoming labeled. In other words, if you are a heterosexual girl or young woman, you are damned if you don’t and damned if you do. If you refrain from any expression of sexiness, you may be written off as irrelevant and unfeminine. But if you follow the guidelines, you run the risk of being judged, shamed and policed.

Laurie Penny complemented Ford’s discussion of slut shaming, pointing out the unfortunate fact that we cannot always rely on our female sisters to get us through the hurt. Despite stating, ‘solidarity with other outspoken women mitigates the hurt of being shamed as an annoying feminist slut’ Penny admitted that some women may easily fall into the competitive trap of employing misogynistic language to degrade other women.

In my own follow-up on this disheartening phenomenon, I discovered that researchers in the U.S. have found this girl-on-girl trash talk is something even evolution has failed to stamp out. According to a study conducted by Nicole Scott from the University of Minnesota, female chimpanzees are aggressive and “negative” when communicating with other female chimps but turn on the charm in the company of males. Scott studied the different gesturing strategies used by a group of female chimps at Chester Zoo in Britain and found they “apologised” less often to one another but used more expressions of greeting and submission when communicating with males.

Throughout the conversation, Emma Jane made numerous insights into the fallacies propagated mostly by men, using the fear factor to scare women into keeping chaste. The most popular among these is the horrific notion that ‘more than the average’ number of sexual encounters will leave you with a ‘loose vagina’. Shortly after Jane disclosed this fear mongering sentiment I heard sniggers arise form every women of child-bearing age or above in the audience. I’m fairly certain their vaginas have been under a bit more duress than a couple of reverse-cowgirls, and I see no panic in their eyes. ‘Do these people even know how muscles work?’ Jane implored, now eliciting wholehearted laughter. ‘The more you use them, the tighter they get!’

Cybersexism was an enjoyable and informative panel that was made even better by the wonderful members of the discussion. The 2015 FODI was a fantastic event that held many more debates and presentations that were original and thought provoking. The one message to take away from this presentation, if nothing else, was the fact that it can be so empowering to see strong women come together and support each other through the myriad anonymous hate they receive – even if it’s just shouting down the bastards.