reading men: what gender is your bookshelf? 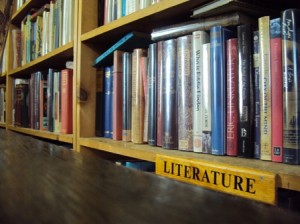 In a recent and candid interview, Canadian literature professor David Gilmour told Hazlitt that he only teaches ‘guys’. If you’re a woman (with the exception of Virginia Woolf), non-white, queer or even an effeminate male writer, your work will not appear on his syllabus.

Gilmour later offered a fumbling non-apology in a follow-up interview with the National Post. Several of Gilmour’s colleagues at the University of Toronto made clear that his policy didn’t reflect the attitudes of the entire English department and students led rallies in opposition of the professor.

Disappointing though Gilmour’s comments were, they weren’t all that shocking. The syllabi of many ‘traditional’ literature courses are blinding in their homogeny. (I mean, of course, those courses not designed for the study of those writers either rarely discussed or the If There Is Time portion of the semester.) Orwell, James, Fitzgerald and Huxley aren’t considered masters of ‘men’s’ literature. Their writing doesn’t come with a comparison to the elite and classic writers of their genres because they aren’t a deviation from what is largely considered ‘good’ writing.

Very often, the Western, middle-class male writers are the elite. They appear on secondary and post-secondary English courses around the world; they are referenced and remade on film time and again in Hollywood; they are the standard to which every other work is compared. They are so well known that their surnames are recognizable enough.

In the 112 years since the Nobel Prize for Literature was established, only 12 women have won.

Though the ‘classic’ works tend to favour straight, white men, there is no greater prejudice than that of women’s writing. Nobel laureate VS Naipaul, had little praise for his female counterparts, saying in 2011: ‘I read a piece of writing and within a paragraph or two I know whether it is by a woman or not. I think [it is] unequal to me.’

He went on to say that sentimentality ‘the narrow view of the world’ is what distinguished women’s work from men’s.

If women fiction writers are more sentimental than men, I haven’t noticed.

On my own shelf, there are Orwell and Huxley; James and Tolkien; Richard Wright and Lawrence Hill. But among them are Julia Alvarez and Toni Morrison; Mary Shelley and Charlotte Brontë; Margaret Atwood and L.M. Montgomery. I respect these writers not because of their gender but because of the quality of their work and their ability to write compelling characters, imagine worlds and recreate eras in such a way that I think about them long after I’ve finished reading.

I have never selected a work of fiction only because a woman wrote it, or dismissed something because a man did. Tom Perrotta’s Tracy Flick is a brilliantly written character and she is beloved by overachieving Gen Xers and Millennials, male and female. Lionel Shriver’s Kevin Khatchadourian, Shep Knacker and Jackson are no less ‘masculine’ (whatever good and bad that term embodies) because a woman wrote them.

However, many of the women authors I love came to my attention in spite of my early education, not because of it. I was taught to appreciate the insight of Orwell and Huxley through weeks of studying and writing about Animal Farm and Brave New World. Every year we picked apart the literary devices in Shakespeare’s plays. There were a few women in our study: one semester we read Harper Lee’s To Kill A Mockingbird and in another, a poem by Sylvia Plath. But for much of high school, the women writers I read landed in front of me through my own discovery, or, in the courses I chose for myself: post-colonial lit in my final year was a class of 12 students, which shouldn’t have even existed, it was so small.

To be fair, a high school can’t offer the same diversity of literature classes a university can, and a large handful of English students are there because they need the credit, not because they have a burning desire to discuss the dramatic irony in Macbeth. But already there is affection for maleness in literature. In the absence of instructors with a more egalitarian approach to their curriculum, students can go through their entire academic life having never thoroughly studied a woman author.

There is still a bias toward women’s writing – considered uncultured and uninteresting since women were, for many centuries, confined to private life. Women writers began to gain popularity during the 18th, 19th and 20th centuries. The 19th century was the age of the novel and, says Professor Lorraine Janzen Kooistra, it was well suited for women who by virtue of their social status became apt at observing everyday, domestic life.

‘A lot of those women needed to be either single or childless,’ she says.

Professor Janzen teaches at Ryerson University in Toronto and has written several books on Victorian art and literature, including two on the poet Christina Rossetti. It was in her class that I studied – alongside Lewis Carroll and Oscar Wilde – the Brontë sisters, George Eliot and Elizabeth Barrett Browning. Professor Janzen says she consciously tries to represent both sexes in her courses and hasn’t noticed a difference in the teaching or reception of women writers.

Still, she says, the tendency of universities to focus on the work of men is also a reflection of the socio-economic and cultural head-start men have had in the publishing world. The academic study of early literature naturally involves an emphasis on standard setting works, which eliminates large groups of writers.

‘There was also a bias – this is part of the gender construction of the time – that women shouldn’t put themselves forward,’ says Janzen. ‘To publish something is to very much put yourself forward.’

Though the earliest and most famous female authors were mostly middle-class women with the means and education to write and publish, they did so under pseudonyms or anonymity. (Jane Eyre was originally published under the name Currer Bell.) This is rare today, but some women still choose to publish using male or gender-neutral pen names. J.K. Rowling famously chose to go by her first initials so as not to discourage boys from reading the Harry Potter series. She was ousted this year as the writer behind The Cuckoo’s Calling, a crime novel written by ‘Robert Galbraith’.

It seems strange, at first, that there should be any preference for the writing of one sex over the other. After all, Rowling has created one of the most famous male literary figures of our time and Nicholas Sparks and Agatha Christie have become icons of genres commonly associated with the opposite sex. But then, reported The Guardian earlier this year, a study by Vida, an organisation that specializes in women and literary arts, found that women are reviewed and at far lower rates than men.

There is something to be said for the gendering of fiction. Some feminists have argued that without the qualification of ‘women’s’ literature, much of it would go unnoticed and unstudied. My own experience supports this. Until I sought out very specific courses in literature – in both high school and university – I hadn’t heard of many fantastic women, let alone non-white, non-Western writers of both sexes.

However, this category brings with it all of the baggage and assumptions that many women try to avoid. At the end of We Need To Talk About Kevin, the novel for which Lionel Shriver is best known and was adapted to film in 2011, she writes, ‘I have sometimes been labeled a “feminist” – a term that never sits well with me, if only because connotatively you have no sense of humour.’

And what would qualify as ‘women’s’ literature? Is it thematically feminist or simply written by a woman? Do Jane Austen, Octavia Butler, Margaret Atwood, Danielle Steele and Stephanie Meyers belong in the same broad category of fiction?

Gilmour might see value in teaching only straight, masculine men, but what a small literary world that is. While I apply the same logic to selecting fiction as I do to selecting music, film and politicians (as in, it is not better or more feminist to choose a woman), I’m grateful that the improving status of women – as publishers, agents, editors, scholars and professors – has brought with it greater legitimacy of women’s writing and a much richer list of must-reads.

Do you read books based on the gender of the author?

As a feminist, do you try to only read books by women?

Have you encountered professors like Gilmour? Let us know in the comments below!

One thought on “reading men: what gender is your bookshelf?”