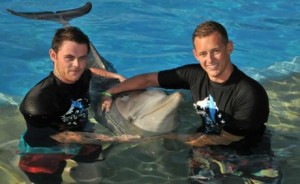 We at Lip are huge fans (and media partners!) of crowdfunding website Pozible, and without them we likely wouldn’t have been able to publish some of our editions of lip. One of Pozible’s current top-rating projects (that has under 50 hours to go!) is ‘The Ride: East Coast’.

The proposed project is a documentary, starring Bondi Beach’s Maxi (yes, the one who just won Cleo‘s Bachelor of the year) and Jesse. It will follow the two of them jet-skiing from Sydney to Cairns (that’s a 2,500km ride), as they raise money for Headspace Australia, which is the national youth mental health foundation.

While Maxi and Jesse’s jobs as lifeguards at one of the World’s most famous beaches obviously comes with a lot of fun, surf, and sun, there are also more serious moments – ones that go beyond British tourists inability to use sunscreen, and people thinking that the placement of flags means you should swim at either side of them instead of between them.

Bondi Beach is located 5kms from Sydney’s infamous “the Gap”, a cliff-face which is notoriously known for people jumping to their deaths. Between the two boys, they have retrieved 12 bodies, all of them from suicide, and all under 30.

Having seen first hand the loss of life, the boys are passionate and committed to raising awareness of depression. The two also have personal connections – Jesse recently lost a friend to suicide. Throughout their 2,500km ride, they will stop at various Headspace centers and speak to people who have been affected by suicide and depression. The aim of the project is to show young people that while their depression may make them feel alone, there are people that love them, and that there are places that they can turn to for help. While the project is heavy in some natures, it also aims to be uplifting and inspiring, and there will be some gorgeous shots of the Australian East Coast – cross your fingers for some whales.

Please see the boys explain this project much better than I am below:

As I’m writing this they have 50 hours to raise the last $5,000, in order to make this film a possibility. So close!