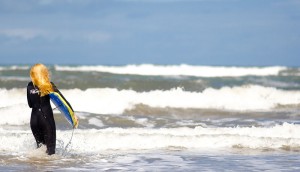 Olive Bowers has a very impressive family tree – her mother is Alice Garner, actor, writer and academic, and her grandmother is Helen Garner, one of Australia’s best known and most celebrated writers. Now, thirteen year old Bowers is making her own mark as an impressive role model for girls her age by writing an open letter to the magazine Tracks, regarding their portrayal of women in surfing.

Tracks bills itself as ‘the surfers’ bible’; however, when Bowers, a keen surfer herself, picked up the magazine, she was surprised that she only encountered one photo of a woman: ‘she was called “Girl of the Month” and she wasn’t even on a beach,’ Bowers stated. ‘She was just standing in a dark room.’

Following this experience of the magazine, Bowers then logged onto their website. The representation of women was, sadly, no better there: ‘There was one video of Stephanie Gilmore surfing. That was pretty good. But even if there was a 1000 videos of girls surfing there was still that section called “Girls” and you clicked on it and it was all girls that weren’t even surfing. Just in bikinis; models really. That really annoyed me.’

It was these experiences of the magazine which prompted Bowers to write a fierce open letter to the editor, Luke Kennedy, in objection to the manner in which women are portrayed. Her full letter can be read here.

In her letter, Bowers ‘bluntly addresses the way [Tracks] represents women’. She attacks how the aforementioned ‘Girls’ section of their website ‘entered into pages and pages of semi-naked, non-surfing girls…These images create a culture in which boys, men and even girls reading your magazine will think that all girls are valued for is their appearance.’

She then goes on to state and to urge her ‘posse of female surfers’ to boycott the purchase and reading of the magazine, let alone promotion. She instead urges her colleagues to spread the word about the values of Tracks, and let the boycott become more widespread.

‘It’s a shame that you can’t see the benefits of an inclusive surf culture that in fact would add a whole lot of numbers to your subscription list…I urge you to give more coverage to the exciting women surfers out there, not just scantily clad women (who may be great on the waves, but we’ll never know)…I would subscribe to your magazine only if I felt that women were valued as athletes instead of dolls.’

Kennedy has responded to Bowers’ letter, stating that the magazine does not a have a non-girls policy, ‘but obviously they are not our primary audience. We have written extensively about female surfers in the past.’

Bowers has, in turn, responded to this, stating that Tracks have ‘to accept that women surf and that’s that. You can’t turn it into something all sexy…People would be outraged if there was a surfing thing and there were no men surfing, only pictures of nearly naked men.’

Bowers points to a gender imbalance not just in the sport of surfing, but in the sports world in general. She believes that women’s sport does not get enough coverage in sports media and journalism. And she would be right.

She also expresses her disappointment in her no longer being able to play inter-school football, because she’s ‘in a girls league, but in school sports once you’re 13, you’re not allowed to play the game.’

Sadly, this incident is not the first time that the issue of sexism and sexualisation of women has emerged as a major issue in the surfing culture. There was this advertisement for surf brand Roxy last year which cause furore for its depiction of women, and the lack of surfing from Australian surfing champion Stephanie Gilmore. During this campaign, exorbitant amounts of time is spent on Gilmore’s (often partially naked) body; yet we never see her face, nor her actually surfing.

This is just the issue to which Bowers is speaking: the sexualisation of women in surfing, and their subsequent diminishment as athletes. Clearly there is something operating within the surfing culture that means that this is a recurring, continual issue – and, even more clearly, something needs to dramatically shift within the culture to recognise women as genuine athletes of the sport of surfing.

This is why it’s so great to have somebody like Olive Bowers speaking up about this issue. It shows that it is affecting the next generation of potential athletes of surfing, and that they are aware of the issue, and want it changed immediately. And I’m with her on that.