the unslut project: a chat with founder emily lindin 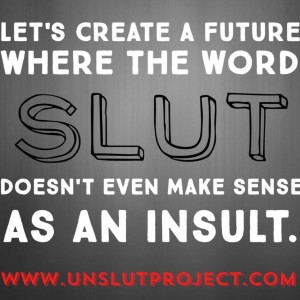 Emily Lindin founded The UnSlut Project in 2013 after American teenager, Rehtaeh Parsons, committed suicide. She had been gang raped and consequently labelled a “slut” by her classmates. Emily decided to publish her own diary entries dealing with sexual shaming in high school as a blog to provide some perspective for other young girls experiencing the same thing. It has since become a space where women and girls can share stories of being slut shamed. The project also provides resources for people who are sexually bullied, and Emily recently made a documentary film featuring conversations with people who have experienced slut-shaming.

What is the UnSlut Project and how did it begin?
It’s a movement against slut shaming and sexual bullying. It’s international and it involves all genders, all races and all ages from all walks of life. It started with my diary from when I was bullied in middle school. It was just going to be a blog of my diary entries because I figured what I was going through was common but the rare thing was that I had saved these diaries – most people get rid of theirs. And I felt I had an obligation, in a way, to put it up online and provide some perspective of what it was like to be going through that. As soon as I did that, just unsolicited, women started sending me their stories. It was like I had invited them, by sharing my own experience. And I thought, ‘well, I can’t speak for everybody, I’m this privileged white lady who grew up in New England and I had a lot of help from my family and the resources that by chance were available to me. And most women don’t have those.’ If there was a girl reading those stories who couldn’t relate to me, let’s say she was a black girl growing up in a different part of the country or a girl growing up in India, she might say ‘well that’s all good for you but what I am supposed to do?’ Every story is so special and individual I figured that I needed a platform where all those voices could be represented. That’s how the project developed into a movement.

Has there been a change in how the project has been received since you began?
There is definitely a change. When I first started out the response was overwhelmingly positive but people also felt a bit of trepidation about it. “Slut shaming” was this new term. I always write it with “slut” in scare quotes –sometimes people would put the whole phrase “slut shaming” in quotes as if only maybe slut shaming happens. When I started moving into more mainstream platforms and out of the wonderful bubble that is the feminist blogosphere, I started getting some negative attention from Men’s Rights Activists. And I don’t want to paint with a broad brush but also from women with religious backgrounds who feel there is no space for this type of movement within their religion.  And it’s their responses that I always try to engage with and to find a way that they can feel sexually empowered and continue on with their religious beliefs.

What are the repercussions of slut shaming?
We live in a world where girls have been taught that their worth as a person is dependent upon others seeing them as “virginal” or “chaste”. So when they are called a slut, but they don’t yet understand that other people don’t define them (which I don’t think most of us really learn until our ’20s) they feel worthless. Because all of a sudden they are just a slut. There’s no space to be a slut and a mother or a slut and a doctoral student. A slut is all you are and then people feel they don’t have to take you seriously and can dismiss you. And for all women, whether they buy into the idea that being a slut is a bad thing or not, this possibility of shaming hangs over us all the time. And it restricts our speech; it restricts our capacity to participate fully.

What do you think the word ‘slut’ means?
The problem with the word is that it can kind of be anything – we have t-shirts on the website that say ‘define “slut”’. When I do high school workshops I ask the kids “what do you mean by ‘slut’?” It can mean whatever the person using it wants it to mean. The answers vary and I think that’s why the word is so powerful. It often has to do with a girl who has had “too many” sex partners. And how many is too many? It’s whatever the person using the word thinks is too many.

Have you found that sometimes the response to calling out slut shaming is to dismiss the validity of the label for a particular woman rather than challenge the notion that sexual activity in a woman is a bad thing?
Some men make light of it, especially when they are uncomfortable. It’s also something I hear repeated back by women and young girls. Often I’ll hear ‘he called me a slut and I didn’t even deserve it’. And I think we need to take a step back and think about why anybody would ever deserve it. Why should we deserve any negative response just for being sexual?

Is there a space for reclaiming the word ‘slut’?
One of my issues with reclaiming the word is that it’s mostly a privilege that white women have. A lot of women of colour don’t have the same opportunities to be heard. And in the United States there is a really big gap between the way white women can talk about sexuality and they way that women of colour can. But if a woman says to me ‘I want to reclaim the word, I call myself a “slut”’, I would never tell her not to. I think ultimately we are envisaging the same goal.

Your project is available to girls and women who know about it and have the resources to access it. What broader or more institutional changes would you like to see for the people who don’t have access to the UnSlut Project or the ideas it discusses?
The main issue here in the United States is the lack of comprehensive sex education. We often have sex ed that is really anti-sex ed which is worse than no sex ed. These abstinence-only programs are funded by our government and they directly correlate with rates of unwanted pregnancies and STDs. It’s just an all-round terrible thing and the statistics support it and everybody knows it but everybody is still too scared to recognise that we can talk about sex to school children in an age-appropriate way. We can talk about it to include LGBT voices and decision-making and consent. Comprehensive sex ed needs to normalise the idea that women can be sexual and not feel any shame about it. But we are so adverse to even thinking about that as adults that we really screw our children over. We leave them out in the cold with no information and so they learn about it from watching porn online, which usually is not feminist.

Within the broader oppression of women, where does slut shaming fit in?
I think it’s underlying almost everything. The control of women is so dependent on them not having control over themselves – if women can make decisions about their own bodies and how they’re going to live their own lives, then men don’t have that power. There’s the misconception that there is limited power to go around and that if women steal it then men will be disempowered. And that’s just not true. Sexual freedom and freedom from stigma around sex is a key component of general freedom for women.

To find out more about The UnSlut Project or to get involved, click here.