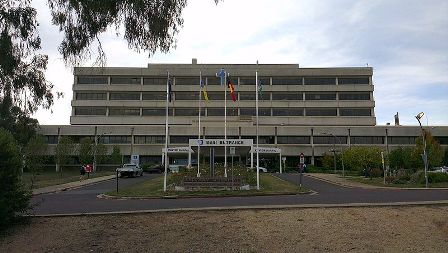 Before I start I just want to clarify that the Calvary Hospital in Canberra is a public hospital. More to the point, it is funded by public money.

You see, due to some wonderful decision making by the Commonwealth Government, the construction and operation of the only public hospital on Canberra’s north-side (if you are not from Canberra, those from the north tend not to venture to the south and vice versa. It’s weird, but it’s a very real thing here) was outsourced to the Little Company of Mary.

Under the agreement, Calvary Hospital does not have to do anything involving IVF and abortion. They also don’t offer any contraceptive advice. Due to having my head in the sand, I had no idea about this until Network Ten’s The Project did a story on a girl who went to Calvary Hospital asking for the morning-after pill. The girl in question was not only turned away, but refused a referral. The morning-after pill is offered at the other public hospital in Canberra, which the girl probably wasn’t aware of, and would certainly not have known even after enquiring at the medical facility that is supposed to help the public when it comes to medical concerns.

I am all for religious freedom, and if a privately owned company offers private services to people who pay for them with full knowledge of the restrictions of the agreement between them, then I don’t have a problem with it.

My issue is with publicly funded vital services that practice discrimination in the name of their beliefs – beliefs that aren’t shared by a majority of society. A public service should service ALL of the public. Australia is a secular society, and as an Australian entering a public hospital, I expect secular service.

What I find most frustrating is that were any other religion discriminating in any other way, people would be kicking and screaming like there is no tomorrow. But once the Big C is mentioned, all discrimination suddenly becomes “religious freedom’.

Take for example the government dropping their proposed reforms to the current anti-discrimination laws this year; reforms that targeted discrimination by religious groups, which to me, was a pretty sad day in Australia’s history. No one should ever have the right to discriminate, no matter what their personal beliefs.

In my eyes, Calvary is practising discrimination against those who do not have the same belief system. If I go into hospital asking for a legal medical service, the very least I expect to get is a referral. By not doing so, I do not believe that they are fulfilling their duties as medical professionals. Indeed, by not offering important services at a public hospital due to beliefs that should stay in the private sphere, they are not fulfilling their duties as medical professionals. I am not saying that all doctors in Calvary should be forced to offer all services; I am saying that the hospital itself needs to offer services relating to contraception, and hire doctors that do not object to these services.

If Calvary Private doesn’t want to offer common and legal procedures, and state that clearly when people hand over their money, then all well and good. But I expect a publicly funded hospital to offer them.

I don’t pay my taxes so I can then be discriminated against by my local hospital based on the fact that I don’t share the same beliefs as The Little Company of Mary.