why jess from new girl is not anti-feminist 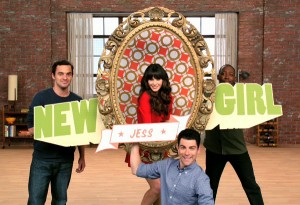 Let me set the scene: After a bad breakup, Jess – a quirky young woman played by Zooey Deschanel – moves into a hip apartment with three young men. Her male housemates often ridicule her for her tendency to sing her feelings instead of speaking them, her brightly-coloured stockings, and they occasionally encourage her to be more ‘conventional’ so that she can easily attract male attention. (Because in this alternate reality, Zooey Deschanel has trouble with men.)

New Girl was pretty much panned by feminist writers and bloggers immediately after airing for being sexist, stereotypical drivel. The main problem, as these writers saw it, is that Jess appears to be a classic ‘Manic Pixie Dream Girl’. Coined by the AV Club’s Nathan Rabin, the Manic Pixie Dream Girl is a quirky, whimsical female character, whom exists in films only to help the male protagonist achieve self-actualisation. Despite being arguably more interesting than whatever deadpan dude she is helping to catalyse an exciting life change for, the Manic Pixie Dream Girl is rarely given her own agency. Or, you know, even storylines.

Jess from New Girl does, based on a first impression, seem to fit into this category. She is an elementary-school teacher, gets embarrassed when she has to say the word ‘penis’, and the fact that she wears glasses is supposed to explain why men are not able to appreciate those baby blues beneath the frames. It doesn’t help matters that Zooey Deschanel is pretty much the poster-girl for Manic Pixie Dream Girl-dom, with her penchant for vintage fashion, bangs, and cupcakes.

But New Girl is actually not the (sexist and patriarchal) devil incarnate in the form of an “adorkable” television series, intent on setting the feminist movement back decades. It is not deserving of the exceptionally harsh criticism it has faced.

To begin with, Jess is not a Manic Pixie Dream Girl. Yes, she likes puppies and polka dots and frequently styles her hair in pigtails – but these traits alone does not a Manic Pixie Dream Girl make. The main characteristic of the MPDG is that she is not the main character. The MPDG is never the protagonist – she is designed to always come second to a male protagonist, as she helps him face death / get over a bad breakup / hold his hand through a generic emotional crisis. Jess is the main character of New Girl, and the show revolves around her trials and tribulations. What she feels, what she wants, and how she gets over her bad breakup – very little handholding from men required.

If you try to criticise New Girl solely because Jess is rather twee, then you undermine what is (I believe) on of the central arguments of feminism: that women should have choice. And if Jess, as a character, chooses to wear frilly frocks – and it is true to the story that her character would make that choice, and she is not doing for the sole purpose of appealing to the male gaze (or, you know, something like that) – then that is her choice.

Similarly, some bloggers have criticsied Jess because she is not a typically strong, tough female character. She’s no Buffy, that’s for sure. But although I enjoy a kick-ass female character as much as the next feminist, I don’t think that there is anything inherently wrong with a show featuring a female protagonist that subscribes to a classic model of femininity. There is nothing wrong with ‘femininity’ (whatever that is – wearing dresses?) itself. Just because Jess likes to wear clothes with an excess of ribbons, doesn’t mean her character can’t be as smart or determined or strong as Buffy. Personally, I don’t quite understand why characters – or even people – with an upbeat attitude and genuine enthusiasm are automatically categorised as silly or unrealistic. Nice people exist out there; and they can be tough, too. I’ve met them.

New Girl is ultimately a fun and fluffy show, which often genuinely heartwarming and witty – and it appeals to my aesthetic sensibilities. Yes, there are bake-offs. Yes, there are ukuleles. But if you can handle a little twee, you might be surprised by how much you enjoy the show. Just don’t start using the word “adorkable”, I beg you.

If you’re interested, New Girl is now out on DVD.