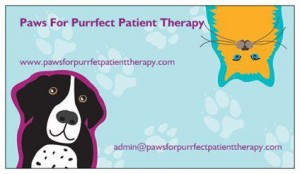 Naomi has explored a few different career options before finding a good fit. From hairdresser to journalist, her varied skills and outstanding level of compassion have led her to developing and maintaining her own animal social action group that’s as good for the pets as it is for their owners.

The concept for Paws for Perrrfect Pet Therapy was created late in 2011, founded on the need to ‘bridge the gap in the current health and welfare support system’ for pet owners and their beloved fur babies.

‘I have been made aware of countless people sleeping rough because there is no refuges that cater for pets and no support system to fall back on,’ she says.

‘I wanted to alleviate the distress of individuals during peak crisis periods in regard to who would look after their best mate(s).’

Since their doors opened at the start of 2012 in Melbourne, PFPPT has really hit the ground running, creating local partnerships with RSPCA, Animal Aid, The Lost Dogs’ Home and The Lort Smith Animal Hospital, as well as gaining government funding for animal welfare from the Department of Primary Industries, as well as shortlisted in the top ten entries for the Sun Super Dreams competition.

And on the animal side of things, PFPPT has become an invaluable resource to the many pets, from food and shelter, to unconditional care and love.

‘My life and home are an endless parade of pets. From Cavaliers to Foxy’s to Staffy’s to Chihuahuas and a moggie and a ragdoll somewhere between. I have cried for their welfare and I have laughed at their antics,’ she says.

‘Today I got up at 4am to feed sick pets antibiotics and my windows frames have been chewed by a puppy. I wouldn’t take one second of it back.’

‘Every animal that passes through my front doors leaves paw prints on my heart.’

While currently working on expanding PFPPT, Naomi dreams to eventually have a Paws head quarters in every state, allowing national service delivery and ultimately creating a society that doesn’t stand for animal disposal.

‘[I want] to help those most vulnerable members of society who may otherwise fall through the cracks,’ she says.

‘Paws operates under the belief that that how society treats their most vulnerable (including animals and consumers) is a reflection on society as a whole.’

‘Our pets deserve the unconditional love, care and loyalty they afford their owners,’ she says.