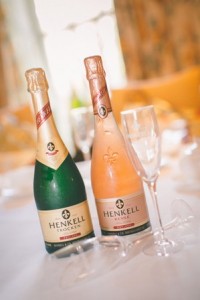 Last fortnight I wrote about being bewitched by an intoxicating champagne at Ananas Bar & Brasserie. After all, who isn’t swept away by a Gatsbyesque fishbowl of French champagne?

Coco Chanel definitely was. She once cheekily remarked, ‘I drink champagne on two occasions. When I’m in love, and when I’m not.’ But unlike the matriarch of the fashion house that is perhaps most synonymous with effortless chic and glamour, many of us do not have the pay packet that comes with endless bottles of Moët.

Luckily for us, champagne has a rather dapper sibling- sparkling wine. Don’t think of it as Dannii to Kylie Minogue. Think more like Liam to Chris Hemsworth — both completely yummy and at times barely distinguishable, but one’s thought to have a higher level of sophistication — even if it’s in name only.

Juliet once famously lamented, ‘What is in a name? That which we call a rose by any other name would smell as sweet.’  While sparkling wine may not sound as prestigious as Champagne, it can be equally (or more) delicious, and as much care can be made in creating it.

Champagne is actually a form of sparkling wine, which comes from  and is made in the Champagne region in North-Eastern France, and only certain grape varieties are allowed to be used. There are further stipulations in how the champagne is made. The rules concerning sparkling wine are more lax, but that’s not to say that they all aren’t made with the same care and consideration. It does explain the price difference in Passion Pop to Bollinger, though.

Because of the wide range, it can be difficult to determine which sparkling wines are comparable with champagnes — especially ones that won’t see you running to smash your poor piggybanks.

I was fortunate enough to be invited to a High Tea to celebrate a tasting of iconic German brand Henkell’s sparkling variety, run by the charismatic brand ambassador Klaus Kurten.

Henkell has proven presence on the sparkling market — launched in 1856, it is available in 70 countries worldwide. And according to Klaus, we Australians do consume quite a bit of the bubbles. Who would have thought?

Think of the Trocken more for the day, and Rose for more the evening. Or simply go with whichever aroma draws you in more – there are no rules when it comes to sparkling (unless you count where you should aim the cork…)

And at $18.99 for 750ml, it doesn’t break the bank, but still gives the assurance it’s been made with care and consideration. And with a company that has a motto of “Cheers to Life”, what more could we expect?