back to ba(sex): five STIs you didn’t know about 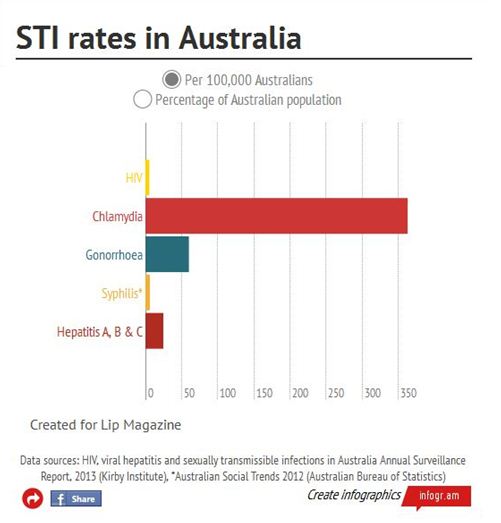 If you are sexually active, one would hope you have heard of the infections that can set upon your bits if you have a lax attitude to safe sex. Perhaps they are not as embedded in your brain as one Geordie Shore cast member, whose sweet nothings during love making consisted of ‘chlamydiaaaaa!’ Beyond chlamydia, your knowledge base of venereal disease likely includes HIV, gonorrhoea, syphilis, herpes and HPV (especially the strains causing warts.) Occasionally in our waxing-crazed society, crabs will be mentioned; maybe even a few strains of hepatitis. But alas, dear hearts, this is not an all-encompassing list of STIs.

In this instalment of Back to Ba(sex), you shall be provided with details about several nasties affecting your panties, which are rare, but you are nonetheless susceptible to when sexually active. I am not a sexual health professional, but this information has been appropriated from people who are, and the organisations that employ them. Please do not use this information to self-diagnose. As a hypochondriac, I would not recommend it, unless you are masochistic. With that disclaimer out of the way, let’s get down to business!

Chancroid is a manifestation of painful lesions caused by bacteria and can be confused with herpes or syphilis. In men, you might get one sore on the penis, but women will often experience four or more, typically found on the labia majora. The sores might go away by themselves, but for many people it takes months. They can be treated with antibiotics. Treatment is probably a good idea because depending on the site it can cause some serious damage, like fistulas, i.e. an abnormal hole in your bowel or urethra.

Similarly to chancroid, donovanosis is a bacterial infection causing an ulcer on your genitals, groin or anus. If untreated, this ulcer will become a nasty sore that destroys and scars the skin it plagues. It is very rare in Australia, mainly affecting remote Indigenous communities. It is also picked up by travellers in developing nations, particularly those in tropical climates. The good news is it can be treated with antibiotics which will see it starting to clear up in days. Bye, bye, bacteria!

Lymphogranuloma venerum (LGV) is a rarer form of chlamydia-type bacteria that can become chronic if untreated. It causes the groin’s lymph nodes to swell, blood and pus in stool and a painless sore from the waist down. If you do not undergo the three week antibiotic treatment to rid yourself of it, it can cause swelling of the genitals, inflammation of the brain, infections of the joints and organs, and fistulas (often between the vagina and anus.)

Molluscum contagiosum is also known as “water warts” and is spread by skin-to-skin contact. The illness appears as raised papules (lumps and bumps) in the groin and/ or other parts of the body. They are often white, skin-coloured or pink with a dimple on their surface and may be itchy. As their name suggests, they are pretty darn contagious: touch one, then touch another area of your skin and soon a wild lesion appears! Molluscum is curable with freezing, chemicals or laser, but will generally go away after two years of chilling out on your dermis. Once the lumps are gone they will not be back unless you are exposed to the virus again.

Trichomoniasis is spread through contact with sexual fluids containing protozoa and is more common in women than men. It will commonly affect the vagina, but the urethra or bowel can also host the parasite. In women, trich will cause a foul-smelling, frothy yellow-green discharge, itching of the genitals, as well as small sores on the inside of the vagina. Again, take one or two rounds of antibiotics and you will be fine.

These are five sexually transmitted infections you may never have heard of, but five that can affect you and can be easily treated with modern medicine. If you are worried about your bits, you should report it to your doctor. They are generally pretty good with these things.  But without being schooled on what these less common infections entail, it means you have less chance of your healthcare professional adequately diagnosing an illness.

When looking at the above infographic, it is apparent that some STI rates are particularly uncommon, but they are covered in sex education. That puts the rarity of the STIs we have looked at here in perspective. They are nevertheless relevant when you consider that undetected infections can put you at greater risk of contracting chronic infections, like HIV.

As we have seen with some aforementioned symptoms, particularly those affecting the skin, they can be mistaken for other STIs or as harmless things that will clear up on their own. It is often the case that you can only be examined and tested for what you ask for. I don’t know about you, but it always irks me when doctors are nonchalant about testing me for HIV because I’m a straight woman who has never had sex with an intravenous drug user or man who has sex with men.

You will not be screened for anything and everything unless you are vocal about it. The fact of the matter is, your body is your body. You only have one. You must exercise autonomy over it. But if you are not making informed decisions and communicating with health professionals as best you can, your autonomy is compromised.