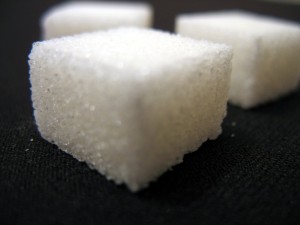 Dieting is bad, no duh. Carb-counting and strict food plans tend to end in fatigue, tears and ice-cream, and are not a way to ‘become more healthy’. That said, there’s been a new trend recently to go sugar-free. Not to lose weight, but to improve health and wellbeing. You can find the science of the debate here.

This week I spoke to Shannon McKeogh, who works in communication/marketing at RMIT and ‘broke up with sugar six months ago’.

1. How long have you been sugar-free? What made you decide to do it?
Sugar and I broke up about six months ago. I’m not sure if we’ll get back together again. Years ago I read someone that sugar was evil and giving it up would be awesome for your skin. And the vain part of me thought, ‘wow awesome skin would be awesome.’ But being a chocoholic I quickly dumped the idea of having airbrushed skin for the love of eating blocks of chocolate.
I started thinking about giving up sugar again seriously because of a good friend I lived with became vegan. I was doing a lot of vegan cooking and it made me think about my food and health differently. I came across another Sugar Be Evil article and thought, ‘heck, why not give it a go?’ Airbrushed skin wasn’t the prime reason any more. Since about the age of 17 I have had pretty bad digestion problems which can cause cramping that could last for days. I was spending about $30 a month on natural digestion medicines. Being sugar-free isn’t a miracle cure but I very rarely have stomach pain and I don’t need the drugs anymore.
I got my hands on a copy of David Gillespe’s Sweet Poison which I read in a single day. It scared the crap out of me which was probably the biggest motivation in going cold turkey.

2. How is sugar-free different to dieting?
A lot of people do give up sugar for dieting purposes and I think it’s a great thing to give up because sugar just makes you hungry all the time. David Gillespe calls it a ‘lifestyle choice’ rather than a diet which makes me laugh because it sounds pretty wanky. But yeah, it’s a lifestyle choice. A health choice. Diets are something you do for a couple of months and then you stop because you reach your goal weight. This is different, it’s about thinking about food differently and after a few months it just because habits to avoid certain foods anyways.

3. Has it been easy? What did you have to bid farewell to?
Not really. It’s more a psychological thing rather than anything else. I was recently working as a waitress and serving people these delicious pieces of cheesecake and I really, really wanted like five of them. Topped with ice-cream and whipped cream and more strawberries please. Not because I was hungry, just because. I recognise it as an addiction now. I didn’t think I was addicted until the first few days off sugar where I felt awful, just really anxious and headache-y. Now I feel grand and my energy levels get me through the day without needing that sugar rush.
I’ve obviously laid off the obvious stuff: cakes, bickies, chocolate, jam. But other things which you wouldn’t think of like Asian sauces and most cereals – even cornflakes! My old favourite sweet chilli sauce being about 60% sugar. More than chocolate!
But I’m not completely sugar-free. I eat a bit of fruit, but not heaps and I still eat sugary things in a small quanty, if a friend offers me a small piece of chocolate it would be rude not to eat a piece wouldn’t it? I generally avoid food stuffs with a sugar content over 5% per 100grams.

4. How do you cook / eat out / have fun without sugar?
Eating out is easy, most foods are low in sugar anyways.
Cooking is easy, see above.
Finding yummy sweet things that are sugar-free is harder. I use substitutes like Rice Malt Syrup (tastes like honey) and dextrose in recipes. The fruity recipes are the best tasting but I have had a lot of flops with trying to recreate one of my favourite treats. I love Hungry Tum’s recipe book, and Sarah Wilson is also a huge sugar-free supporter and has some recipes on her site.
I don’t eat as many sweet things these days as I don’t crave them so I get by making a few raspberry muffins here and there without going too crazy.

5. Feminism is about (among many things) women having control over their own bodies. Does feminism have any impact on your choice to be sugar-free?
To be honest not really as it was a health choice rather than based on controlling the appearance of my body. Yet, I have feminism to thank for helping me steer clear of bad dieting choices and not worrying about my appearance so much.

Have you tried being sugar-free? Share your experiences below.