shut up: ABC ramp up for disability issues axed 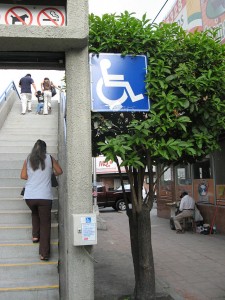 When I learnt that ABC Ramp Up is set to be defunded with the new Federal Budget I literally involuntarily yelped ‘Oh my god NO!’

I was still waking up in bed, doing my usual morning Twitter check when I found the news. Tears streamed down my face as I scoured the internet for evidence to the contrary. Ramp Up has since announced that they will be shutting up shop on 30 June. The website will remain but new publication will cease.

This might seem rather fluffy compared with other proposed budget changes such as the tightening of the Disability Support Pension, which people depend upon to make ends meet. If it gets through, this budget will affect me enormously in a number of ways. I have mental illness and autoimmune disease, so the Medicare co-payment will force me to ‘lift’ an already heavy load of health care costs. I am also an almost graduated social work student and could be up for thousands of extra dollars in HECS debt. These changes will hurt me, but none could hurt me more than the axing of Ramp Up.

Media is an incredibly powerful tool. It feeds the public information about how we should view and prioritise particular issues. This is why feminists rightly take such a strong stand against sexist media ‘entertainment’ and marketing. The problem for people with disabilities is that they are almost entirely absent from the media, despite the fact that they make up 15 percent of the Australian population.

It is no wonder then that people with disabilities are incredibly marginalised; they experience high rates of violence, poverty, unemployment and social isolation. The gap in social inclusion between disabled and non-disabled Australians has widened over the past decade. People with disabilities are undervalued, silenced and forgotten, and the issues facing them are rarely on the agenda let alone prioritised by the mainstream community. I don’t think that the media is solely to blame, but it plays a major role.

When you connect with writers and readers at ABC Ramp Up you see that people with disabilities are worthy human beings with fantastic and incredibly diverse insights and stories. You realise that there is nothing wrong with being disabled; actually, there is much to celebrate about it. Having worked in the disability sector for almost eight years this was not new to me. But I can pinpoint the moment when it truly sank in; when I began ‘to live unapologetically in a body society tells [me] to be ashamed of’ as Stella Young, ABC Ramp Up editor, puts it.

I was reading an article on Ramp Up by Jax Brown, who wrote:

‘I spent 12 years hearing and feeling the message that my [cerebral palsy], my very body, my muscles were so very wrong. But as time progressed, I realised that the CP wouldn’t go. It was there. Inside me… It wouldn’t leave even with all the exercises and painful stretches every day. All this pain and still, I couldn’t expel it…

‘I wish that someone had told them that my body did not need to be ‘fixed’. I wish that someone had taught [my parents] the social model of disability, and that it is not the body which needs to be changed but society. I wish I’d had role models and pictures of others with non-normative bodies to put up on my wall and look up to. I wish I had been taught ways to connect with my body as it is and the unique way my muscles and emotions are intertwined, as I have now learned to appreciate and find beautiful.’

It is difficult to express just how stories like this on Ramp Up have so profoundly impacted me personally and in my disability advocacy work. It exposed me to more helpful ways of understanding disability and expressing my identity. Initially this related to my mental illness, which I began to see as a legitimate part of who I am instead of something I forever need to work at fixing. I have very little space to embrace this part of me because I am expected to hide mental illness in shame; to make a core part of my identity invisible. I have never felt better about myself since reading the stories of other disabled people who show me how to accept impairment as something that contributes to my life rather than detracts.

More recently as I come to terms with physical impairments associated with my autoimmune condition, I think I would be in a much darker space if it was not for the positive narratives coming through Ramp Up. It makes me wonder, might it have been easier for Jax as a child if she and her parents had access to Ramp Up? I am deeply saddened for myself and the many others who benefit or are yet to benefit from what Ramp Up offers. I know that I’m not the only one. Since the announcement many readers publicly shared what it means to them:

Belinda – ‘Such a shame. This is where people with disabilities had a voice, I had a voice. This and the termination of the Disability Discrimination Commissioner is a huge blow.’ (Facebook user reply to ABC Ramp Up)

Veronica – ‘…As a community of people with our various situations, it was great to hear from others, consider opinions and experiences of others, as having a disability or caring for a person can often be alienating and this forum kept a lot of us in touch and abreast of issues.’ (Facebook user reply to ABC Ramp Up)

Kate – ‘Ramp Up has done more to lift the level of disability discourse in Australia over the last three years than any mainstream media outlet before it. Its loss will be significant. Thank you, Stella and Karen. We miss you already.’ (Reader comment on ABC Ramp Up website)

People with Disabilities Australia (PWDA) has organised a petition urging the ABC and the Federal Government to save Ramp Up. It is getting close to the required number of supporters but there is still a way to go.

If you want to show your support for the voice of people with disabilities please sign it here and share it as widely as you can.