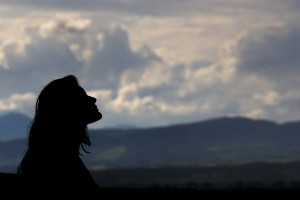 She’s fourteen – though she is often mistaken for twelve – and a mixture of insecurity and confidence is etched into her movements. A freshman in a tiny Texas town, she tiptoes through the halls of her high school quietly and curiously.  She’s not quite sure how to carry herself – this body of a child, all angular and flat, while her friends are blossoming and budding. She’s shy around strangers, quick to cry, even quicker to blush. She is not beautiful, no, not exactly. She is different – all big blue eyes and brooding potential.

She’s fourteen and trying to find her place in the high school hierarchy. She’s neither bubbly enough nor busty enough to be well-liked. She’s not studious enough to join student council or the math team. She wonders why she can’t be a little bit of everything, but an unwritten rule demands she pick her clique. Unable to label herself, she spends the first week eating lunch alone.

She’s fourteen and joins the cross-country team. When she runs, a sense of grace and self-assurance stirs inside her, which she hasn’t yet learned to harness. She tramples her insecurities into the sidewalk, leaving them behind for now. She makes friends and earns a label: “sporty.”  She no longer spends lunch weeping in the bathroom, but the memory of loneliness remains stamped onto her heart.

She’s fifteen and girls are mean. Heart-wrenchingly mean. She returns home and collapses into her cocoon bed, staring at the melancholic purple walls.  Bitch: the word scrawled messily across the front page of her notebook.  She rips the page to shreds, but the black ink still seems to snarl…the words feel damning between her shaking fingers.

She’s fifteen and dating a boy. He’s sweet, all goofy laughter and gangly limbs. They meet after school and make out in the hot tub at the gym.  She navigates the lust and fear with her lips, wondering if she’s doing it right.  She thinks she likes the way it feels. Isn’t kissing supposed to be like fireworks? There’s no flash! bang! of July 4th, but his mouth is warm and, besides, everyone else is doing it.

She’s fifteen and a boy touches her. She lets him – she thinks she wants him to feel her heartbeat, the rush and pulse of her body. But almost immediately, a feeling of shame slams through her chest. She pulls away, breathless in a cold and painful way, and leaves without a word.

She’s sixteen and counting calories. Sixteen and convinced that forty-four kilograms isn’t light enough. Every meal becomes a nightmare, but she learns how to hide her hunger and hate her appearance. Her heart begins to dance, skipping beats and aching through her shirts. She feels dizzy, terrified, and weak…but pretty.

She’s sixteen and everything comes crashing down.

She’s sixteen and begins to see the self-destruction she’s inflicted. Dangerously close to devastation, she realises things must change. She fights to get healthy, and she learns to look past the shape and size of her body. She finds strength in her family, her friends, and – most importantly – in herself. And for the first time, she understands that “pretty” is a dangerous and destructive word. A word that will take years to lose its power over her.

She’s seventeen and reckless. There are late-night parties at the lake, with bonfires and guitars and sips of alcohol. Relationships swell and collapse in the midnight hours. The boys listen to metal bands with names like Dragon Fire and Axe of Darkness, and she laughs with her girlfriends as they invent new lyrics and finish each other’s sentences. On the Fourth of July she sneaks out to set off fireworks. She spots the boy she likes – the one with the movie-star smile and the silly nickname. He launches a Black Cat at her – she gasps at the heat and the phhhhhhst as the firework catapults past her face, stinging the side of her cheek. She is angry, rattled by the scent of burning air. But he scoops her up, throws her over his shoulders, and she laughs wildly, the sound brighter than the fire-singed sky.

She’s seventeen and has the best friend in the world. They are like sisters – inseparable and keepers of each other’s deepest secrets. They dress up and take goofy photos, strut down hallways pretending to be runway models, and stay up late discussing crushes, movies, and school. They run together and no one else can keep up; cross-country and track addicts, they spend weekends running, laughing, and daydreaming about the future. This is the sort of friendship that lasts forever, despite distance, time, and growing up.

She’s eighteen and about to head to college.

She’s eighteen and everything has gone by so, so fast. She’s nervous and vulnerable, but ready to take on the next chapter of her story. Her body still aches with the scars of insecurity – some wounds will take years to heal. But the fire in her eyes glows brighter than ever. She is smouldering, a lioness just waking to her potential. A girl on the cusp of becoming a woman. A dreamer whose adventures, hardships, and joys are just beginning.

One thought on “high school sweetheart”