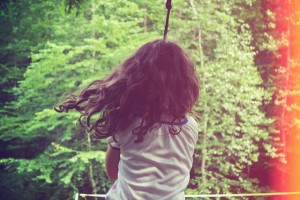 At the age of twelve, Martha was scarred. A jellyfish had wrapped itself around her thin arm like a swarm of bees, like a lyme burn, like a lemon bite. They had to cut the goo off with a surfer’s sharktooth necklace. Her prince was sun-tanned and too old. She didn’t cry until after it was off and her bare arm could breathe again, lashed and agape. She felt she’d lost something important.

Polly lost her marbles at Sea World. Cat’s eyes, Comets, Bumble Bees, Puries, and Indians fell out of her pocket and rolled into the ray tank. She watched them glance off backs and disappear under the patchwork of black bodies.

The mine next to the school bus stop was Egypt, in Laura’s mind. This, she told her friends. This, she believed until the cultural unit of the fourth grade. How she resented those pyramids.

Her Uncle Charles (the vegetarian who didn’t come to Thanksgiving at Gramma and Grampa’s) was a playwright in New York City. Tess thought he must be great – so great, in fact, that he had never showed any of his work to any of the family. Auntie Alice called him an insomniac. Tess resolved to become one, too. She was a committed insomniac during the day, only sleeping at night so that she could be well-rested for the endeavour beginning the next morning. She was simultaneously an insomniac and a schoolgirl, and she tried not to gloat over this fact. She wrote Uncle Charles a letter, secretly, and mailed it, secretly. She opened the maw of the blue postal box, kissed the seal of scotch tape, and fed it to the blue beast. She realised with a horrible bang that she had forgotten a stamp. What good was not sleeping? All was for naught.

At seventeen, Beth was given a radio. She listened to it in the attic while she stretched her legs and back, or picked skin from the bottoms of her feet, or painted her nails, or wrote little poems about summer. It was summer. She learned to tune the radio with her toes. Her record for multi-tasking: tuning with her toes while the topcoat dried, sealing Geisha Red, listening to the fuzz between NPR and Catholic Radio Fairbanks, chewing two flavours of gum (mint and peach: never again), bleeding (she was menstruating), rolling and unrolling a roll of pink bubblegum, and comparing her last three years at Bible Camp, while thinking about her last session beginning next week. She’d have to remove the polish before then.

Plato was Play-Doh before her classmates could read. And even then, one familiar mistake took years to harden D to T, and even longer then for the girl to learn her name belonged to someone else before her – her father’s stepfather: Plato Deleano Burgess. He died before she was born. Sometimes she longed for something more.