memoir: have family, will travel 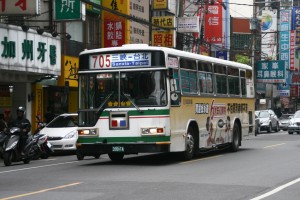 I must confess, I have not taken the bus in a while.  I drive now. This is not a confessional. This was not written on a bus.

Growing up in Taipei—a city of laudable public transportation—I took the bus often. We took Bus 220 south, across the bridge over the canal, and then disembarked shortly thereafter to switch to Bus 108, which would take us up the mountain, into the clouds, away from ourselves. We took Bus 220 north, up Zhongshan North Road towards the school, towards the fumeral, towards a temple.

These buses bumped and rolled us, smelled of old rubber and sweaty steel. Sometimes they gave me headaches. Sometimes, late for school, I would take the bus and pretend I was in America, a little suburban girl, riding a big yellow school bus with my family. Sitting beside an age-etched Taiwanese grandmother eating her breakfast out of a little plastic bag, behind a young, handsome twenty-something-year-old sipping 7-11 coffee and listening to an audio book in Mandarin, I would imagine.

She was my grandmother, taking me to school. Grandma always ate her breakfast of pulled pork and sticky rice on the bus because she had been too busy getting me ready at home. He was my brother, who I was taking to work. Afterward, I would take myself to get ice-cream and then play in the park. He didn’t eat breakfast because his stomach didn’t wake up that early, but maybe he’d have us disembark at Jake’s Country Kitchen and buy me chocolate chip pancakes. I could still get ice-cream. In reality, I’d just eaten peanut butter toast at our little kitchen table, chatting with my mother as she applied her mascara using a little green hand mirror, and then walked myself out of the apartment building, out of our alley, up the road, and across the street, to the bus stop.

Did this happen to anyone else? Do strangers know when you assimilate them into your imagination as family? Do the children of America really ride yellow buses? Our buses were blue and white, yellow or green, or the colour of whatever advertisement screamed from the sides. I was a clothing model as a child. At four I worked eight-to-ten-hour days in studios that smelled of stale cigarettes and hairspray. They’d buy us lunch from Pizza Hut, and, never allowed Coca Cola at home, I guzzled the black bubbles and burped between shots. One day, my mother and I saw me on the side of a bus. There I was, face to face with myself plastered on Bus 220, wearing an outfit I remembered hating. Real kids didn’t wear those things. I must have gone everywhere on the side of that bus. I must have seen so much. I saw me only once.

Growing up in Taiwan meant not growing up in Alaska, where I had been born. We’d return every summer to visit family and to explore the bush in our green canoe. When we were in Taiwan I was from Alaska, and when we were in Alaska, I was from Taiwan. From Taipei, we would fly to Anchorage. We were from Fairbanks, which is another hour by plane. Our layover in Anchorage was about nine hours. We had three places we liked to visit in Anchorage before we left by a small plane to Fairbanks, where, according to some adults I’ve encountered over the years, ‘There is no shopping.’ We took a city bus deeper into Anchorage from the airport. There were some shelves for our luggage. On the city bus, my parents and I were always three of maybe seven passengers. Often, we were the only white people on the bus. I loved it. I was a little girl with brown hair and blue eyes and light skin, but I felt deeply, darkly exotic and wonderful on the bus. Would they believe me if I told them I was from Taiwan? Did they know we had buses, too? Did they know how many people rode our buses, and how, in Taiwan, five people could and often would cram into four seats? On the Anchorage buses, people spread themselves like lone buoys in a bay. I would look around, trying to catch the eyes of strangers. I pretended we were all related, all going to the same café in downtown Anchorage for sandwiches.  My parents and I would get off the bus near said café and walk the rest of the way. We were usually the only pedestrians. What did a little girl do with all of that sidewalk? Skip, of course. We’d eat our sandwiches, people-watch, listen to all the idiomatic English that was so foreign, so fast, so animated, and then walk. We walked to REI, to Blaine’s art supply store, to Barnes & Noble. My father fell asleep in an armchair and was kindly woken up by a sales assistant. He must have thought we were vagabonds with our bags, our yawns, and my father’s beard. Back out to the curb to await another bus. I’d check my parents’ watches all day, in the café, in the art store, in Barnes & Noble, to see if it was time to go to the airport, to go back to Fairbanks, to go home.

We waited for our bus back to the airport amongst panhandlers and veritable vagabonds. Only some had beards. I’d pretend we were all going to the airport, to land in different places.. They would go to Nome, or Skagway, or Juneau. They were returning too. We were all just hoping to get home.

2 thoughts on “memoir: have family, will travel”