memoir: of moose and women 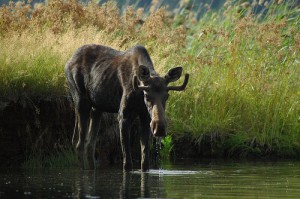 This piece is an excerpt from Ambivalent at Best, a longer memoir work.

Every summer my family and I spent time in the Alaskan wilderness, living in a cabin my father had built in the 1970s, which we improved and amended over the course of about six summers. The first summer there I was nine and the cabin was unlivable. The squirrels and bears had had their way with the structure, pulling pink fiberglass insulation from the roof and scattering it like clumps of taffy around the inside. I did not yet know not to touch insulation, and made myself a bed out of it while my parents set up camp. I itched for days. In my sleeping bag at night, I would roll to and fro, pinched by the tiny pieces of glass that had embedded themselves in my skin. I scrubbed and scrubbed in the amber slough. By the time I was seventeen we would have not one functional, cosy cabin, but two. And no more fiberglass. While the building process on the second cabin ensued, we lived out of the first, smaller cabin. We worked with our hands and bodies all day.

The eating-disordered part of my personality craved this work, because it meant exercise. The health in me loved it as well, because it meant energy well-spent. There are still few feelings in this world I enjoy more than finishing up a long day of manual labor. We would put away the tools, prop shovels against the corner of the cabin, put the covers on the axe heads, then go inside and drink long draughts of water. I would perch on one of the coolers we used as seats, untie my boots and peel off my sweaty socks like second skins. Weather permitting, I would bring my book out to the mosquito tent we had set up on a raised wooden platform overlooking the slough we were settled on.

One summer we had a nightly visitor. About the time my parents would join me on the pavilion, a moose would visit. We had our dinner in the mosquito tent if the weather was not too cold or too wet, and the moose would have his dinner along the edge of the slough. He would eat his way around the bend, head in and out of the water, flanks shiny and wet, antlers still a little fuzzy with youth. He would stand in one particular spot for ten or so minutes. The willows cast a wicker shadow as the sun sank lower behind the spruces. The birch trees soughed in the wind that rambled over the flats. Sometimes it was tableau-still. Anyone who imagines nature as a constant milieu of action and danger has never spent much time with it. Much of the time, in that part of the world, silence simmers.

The moose, large and brown, ate to live. And at those meals out in the wilderness, I did too. It was only intuition that after a long, taxing day of physical labour, the organism must be fed.

Few creatures seem to have qualms about feeding themselves. The moose would stand in the slough, eating away, for hours. Occasionally he would amble up onto the bank to defoliate a tasty willow. Then, perhaps when the bugs became too annoying, he would tramp back into the water. Some of his meal became protective fat stores, some went into maintaining his formidable muscle mass, but I imagine a great deal of it served to keep his body temperature up as he stood belly-deep in the permafrost-chilled water.

I don’t know where I went so wrong in my own self-maintenance. I do not know when I forgot, lost, ignored the moose’s knowledge and stopped feeding myself. I do know that, like the moose, I have many systems to maintain, and that I must eat, drink, and rest well to do so.

It is a slight against nature, that so many young people—namely young women—feel the need to deprive themselves of food in order that they should be at peace with themselves. Truth be told, belly full, book in my lap, and muscles at rest at last, peace shrouded me like a caul. Through the amnion of synchronicity—energy in, and out, and in again—there was no question that I should eat my fill. Anorexia faded in that moment, and, like the moose, I did what I needed to do to survive in that land.

In the wilderness, I was strong and warm. My pattern was to strengthen like this each summer, only to shed my hard-won adipose and eudemonia. Like a deciduous tree, I would shed my energy-producing appendages and freeze. I died a little each winter. I could not needle against the nip, like the spruce trees. I was always on the edge of fainting, fading, falling.

Fainting is much like standing at the edge of a black ocean and falling in headfirst. My father brought me to the seaside in November, one year. It was during my second year of boarding school. It was during my second year of ignoring my serious eating disorder in favour of the external pressures and reward of education. It was a few days before Thanksgiving. We drove to Racepoint, the very tip of Cape Cod. We had been staying in a small inn in Provincetown, and thoroughly enjoying the town in its off-season. The gale that had whipped the cape all day had abated, though a gusting wind still persisted. After dinner, we decided we wanted to be nearer to the ocean than our rooms at the Bradford House inn, so we piled into our rented car and drove to Racepoint. No other cars were out, and in the absence of streetlamps, the back road to the beach was completely dark but for our headlights. Once in the parking lot, we got out of the car, which my father had positioned so that the headlights were shining through the gap at the head of the beach path. I could well imagine a freight ship caught by surprise, or a fisherman on a deck blinded momentarily by our headlights. We walked to the edge of the parking lot where the asphalt gave way to sand. We walked very slowly down the quasi-lit path. Every step I took I could feel the sand pushed in all directions by my feet. The ocean was loud and endless. In such darkness, it was difficult to distinguish the ocean from the sky, both being varied tones of obsidian. It all writhed. In that black panorama, I could see lava flow, starless night, pond bottom, ink bottle. As we neared the edge of the sand, I could make out white wave mucus, broken and spread across the sand at our feet. We were so close to the black that the reach of some of the waves to our right broke and spread above us. This terrified me. I felt sucked in, as if the sand under me would not hold, would be siphoned away by the eating ocean. We were at the edge of a soundscape. It was terrifying and salty, and made me thirsty. Or perhaps it was the fear of such hunger that dried out my guppy mouth.

I was not strong then, like I am now, but I understood that in order to maintain the wild integrity we humans, we young women crave, we must leave our houses, leave our cars, leave concrete, leave our cell phones. Go someplace wilder than you. Take an uncharted hike, let a frothing sea kiss your calves. Go out, and for a few hours at least, don’t look back.

Do you have a memoir inside you? Send your ideas, pitches and words to [email protected]!