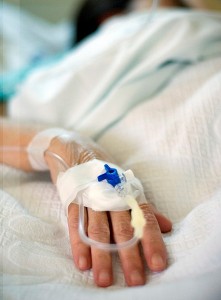 In the last months of my mother’s life, I fell into the first blushes of what I thought, at the time, was love. Chris was nine years older than me, could fix cars and had a crooked nose that reminded me of breakages. The most romantic moment of my life, to date, is when he danced with me in the living room of my empty childhood home. Mum was in the hospice and the mauve carpet was stained with blue curacao from turbulent teenage cocktail parties, but we played Van Morrison on the stereo and he looked at me like it meant something as he swayed his hips closer and closer to mine.

When Mum was in that antiseptic, white-walled place, we would push the downstairs couches together to form a trough in which to sleep and spoon. But when she was home we slept in my single bed, in some kind of effort to conceal the fact that there were two of us. I was skinny then, waning with the effort of maintaining my mother’s life, sick with the knowledge that she was leaving. So we fit, just, but I struggled to sleep through the closeness his snoring, and didn’t want to press myself too tightly to his back hair.

Mum would ask me where he slept. I would always say the couch. I would say it through the gritted teeth that ground against each other the year prior, when I listened to my brother grunt and groan, echoing his first girlfriend at all hours of the day. My brother’s burgeoning sexuality was beheld as endearing and natural; mine was improper and wrong. I never felt that she wanted to cling to my youth, or her little girl. I thought she wanted me to love someone better. Chris was almost a good man. But despite our shared nights, he didn’t come to Mum’s funeral. I thought for a long time that the singular cell left in her that was still mother, not cancer nor morphine, already knew.

I didn’t realise how strange it must have been for Mum to hear us talking about life without her in it. Or how much it must have hurt to watch beginnings, when endings were all she had left. Occasionally I would mention my plans to return to Scotland, where I had spent a few happy months during her remission. She had to do the hard work of dying, yes, but I became more and more aware of the need to lay plans in light of the job that lay ahead: living, without her. When I raised the subject, she shook her head gently, begging me to stop. I continued. I was trying to offer her a memory of something that hadn’t yet happened, so that when it did, she could still be a part of it. But solipsism is intrinsic to humanity; we cannot comprehend that which we are not. A world in which we are dead is, to us, nonexistent.

The hospice was framed by plane trees. The thick, bleached trunks had been growing since the place had been a nunnery. I remember them as unfeasibly tall. But many of my recollections of the good moments amongst the sadness have taken on fairy-tale qualities: the leaves fell like hot air balloons; the sun was melted butter; my mother was perfect.

The twenty-metre journey from her room to the carved wooden memorial benches was a wild adventure, with Mum in her wheelchair, fragile as an eggshell, being slogged across the rugged terrain of the manicured lawns. It doesn’t really make sense, how unstable the earth seemed. But then neither did the translucency of her skin as she held her doe-face up to the light. I would ask Chris to push her, though I was strong enough. He would park her by a bench, sit down, and talk to her about motorcycles, which she rode in her youth.

When Chris walked through the hospice halls I could see how gritty his faded green t-shirt looked against the stark blankness of the sterile environment. He washed his hair with soap, not shampoo, and sometimes I could see its remnants glued to his follicles. He would kiss me on the forehead when he arrived in the evening, because the lights were fluorescent and too bright against the fading day outdoors. There was something about lips against all that knowing that seemed wrong.

On the last Friday night Mum ever had, I was sitting in the corner of her room, knitting while she slept. She opened her eyes and smiled at me, curled within myself in the vastness of her therapeutic chair.

“He’s at home or something. Not sure.”

“Will he stay with you tonight?”

Mum died the next day. I knew that she would. It was time. So I didn’t lie.

“Yeah, I think he’s coming over later. It’s scary in the house alone.”

“I’m glad,” she said. “I like knowing that you have someone.”

I never watched my mother grieve her life. I only saw her fight for it. But I wonder what it felt like on the nights when we had gone home. To watch my brother and his girlfriend go back to their apartment, draped about each other’s frames like clothes upon the broomstick bones of a scarecrow. To see me billow in from the outdoors, flush with wind and stories, damp with rain she couldn’t hear through the concrete walls. My parents were separated, but my father would hover at the fringes of her death, readying himself for the moment when he became the only parent.

I wonder if she thought about these things. And if she watched herself setting, casting a shadow where once there was daylight. Did it hurt her? Did she use her hospital corners at the corners of her eyes, when she sobbed in the same private, keening way I did when I had lost her? I have been told endlessly, and even said myself, that people reach a point when they’re ready to go. I think there is a difference between being ready to stop battling your body in a war you cannot win, and accepting that you’ll never watch your daughter walk down the aisle or graduate. Mum would never hold a grandchild. She would never clutch my baby girl’s hand and walk along the edge of the ocean, marvelling at the perfection of her sticky ringlets.

And I wonder if she looked at Chris and remembered the shuffle of confused bodies learning themselves in tandem: the ache of each other. I think she saw in Chris all the things she could never have again. She saw every part of my life she would miss, and though she was thankful that I wouldn’t be alone, it was simply too much for her to imagine us bridging so many divides in a single bed, at night.

One thought on “memoir: the threshold”