breastfeeding is in vogue 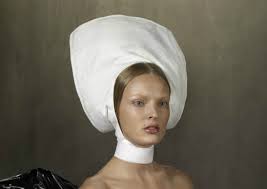 You may have already heard, the Dutch edition of Vogue has as a mother breastfeeding as its cover image.

The October 2013 issue of Vogue Netherlands features model, Ymre Stiekema, posing topless while feeding her baby in a scene reflective of the style of Dutch painter, Johannes Vermeer. Vermeer was known for depicting household moments drawn from middle-class life in the 17th century. The Vogue photo feature, entitled ‘The Master & the Girl,’ continues inside the magazine where Stiekema is styled in knitted cap and turtle neck, and even head-phones, which are not so reminiscent of the Dutch Golden Age.

It is easy to say that breastfeeding is not what you would expect to find on the cover of Vogue and many articles have already made that point, and the one about how the fashion industry is renowned for chasing controversy. Breastfeeding in and of itself is controversial, but it is something that women still fight to be able to do comfortably in public. It also occurs at much lower rates than health professionals recommend. This, as a topic, lends an air of controversy, and there is arguably nowhere more public to raise this than the cover of Vogue.

Seated in a straight backed chair with the baby only barely latched to Stiekema’s breast, photographer Erin Olaf has captured an image for Vogue Netherlands that evokes a time in history when the breast was highly eroticized. It harks to the Renaissance period, a time where the beauty of breasts was depicted in nude paintings that now decorate the halls of the grand European galleries and museums. Poets described breasts as ‘balls of ivory,’ ‘cherries,’ and ‘pearls,’ and women of higher classes turned to wet nurses to preserve their social status and to lessen the impact of child bearing on their eroticized-figures.

But the image in Vogue also makes reference to a shift in this Renaissance period where, among the many other things happening in European societies at that time, there was a resurgence of the breastfeeding of one’s own children on religious and moral grounds.

Dutch medical, religious and moral authorities, particularly within Protestant communities, were all devoted advocates of maternal breastfeeding. Breastfeeding became the hallmark of a pious mother.

The blog world lit up after the Vogue Netherlands cover was released. Breastfeeding and related topics are already good currency for many bloggers. Like many others, Blue Milk commended the photo, which she said looked great and expressed a favor for ‘non-traditional breastfeeding photos and … Mothers looking glamorous or dangerous while breastfeeding.’  But she also pointed out that the baby is very poorly attached.

This was also the first thought that occurred to me when I saw the photo. While I was growing up, my Mum trained to become a lactation consultant. She would study with her friends in our lounge room, looking at slides of well-attached and poorly-attached babes at the breast, learning about suck training, and how to strengthen the baby’s neck muscles to improve their feeding and the resilience of the mother.

I learnt a lot about breastfeeding during that time, and on reflection mostly I learnt just how much there is to it, to keep Mum and baby happy, pain-free, healthy and well-fed.

Aside from the social conversation about breastfeeding in public, or at work, or until what age breastfeeding is appropriate, there is an undercurrent that I think is less frequently discussed by wider society, and that is that breastfeeding can be really hard. We might talk about it as something good and something natural, but that doesn’t mean that women are naturally good at it.

Stiekma, who featured in Vogue last year while pregnant, might be excellent at breastfeeding and the camera has just struck her in an awkward pose, but for all those Australian women surveyed who did not continue past 3 months or until 6 months, I wonder what their reasons were. I wonder if we combined greater public awareness of breastfeeding with more support for mothers on how to breastfeed, these rates wouldn’t increase.