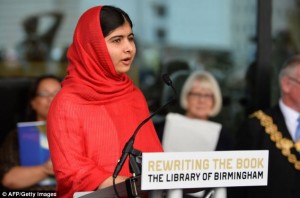 Malala Yousafzai, the Pakistani teenager shot by the Taliban after advocating for girls’ rights to education, spoke at the official opening of a new civic library in Birmingham, UK. In her speech, Malala stated that ‘pens and books are the weapons that defeat terrorism.’ According to Malala ‘the only way we can create global peace is through educating not only our minds, but our hearts and souls.’ This week Malala will receive the International Children’s Peace Prize for her inspirational advocacy work.

The Australian Family Association has supported a controversial anti-same sex marriage campaign featuring images of children. These advertisements use emotive images of babies and children to instruct voters to not support members who openly support the legalisation of same sex marriage. The advertisements play on the ‘think of the children!’ trope used to stymie progress for LGBTI equality, pamphlets reading ‘man-woman marriage is special because: “I need my mum and dad.”’

St. Kilda football club are ‘investigating reports of an incident involving a player at a post-season celebration yesterday’ after it was alleged that a ‘dwarf entertainer,’ Blake Johnston, was set alight while performing. When asked about the incident, AFL boss Andrew Demetriou ‘thought it was a joke.’

Leaders of various political parties pitched their policies to the poor souls in the Big Brother house who (obvs) still have to vote even though they’re doing whatever they’re doing in there. Tony Abbott’s appeal was the most cringey for everyone involved when he appeared with his daughters on each arm and pretty much said “vote for me cause I’ve got hot daughters yo.” What is he, a pimp?