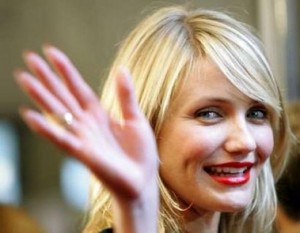 Towering steel statues representing the millions of India’s ‘missing women’ stood over the India Art Fair as it opened on Friday. The installation, titled M.I.S.S.I.N.G, is from artist Leena Kejriwal and is a response to the growing gender gap, fuelled by sex-selective abortion, infanticide, and the death of girls through neglect. The three outsized sculptures are meant to be ‘like sharp, black holes cut out of the sky. Holes into which millions of girls disappear from the face of this earth,’ Kejriwal says.

In an interview with Self, Cameron Diaz has called out the media on their ‘chauvinistic’ treatment of single women. ‘If a relationship fails, it’s because the woman couldn’t hold on to her man, not that the man cheated. It’s terrifying for a woman to get out of a relationship, because it’s always going to be her fault,’ Diaz, told the health and fitness magazine.

An article posted on ABC’s The Drum website looks at the statistics behind the hidden problem of drinking and violence in the home. Ingrid Wilson and Angela Taft use the recent debate on alcohol fuelled public violence as impetus to reveal the staggering levels of assault that occur in private, and the relationship between heavy drinking and domestic assault. Alcohol misuse was present in more than 30% of reported cases of domestic assault in the last 10 years; 82% of perpetrators of domestic violence are male.

An amendment to the new Child Rights Law requiring women to breastfeed for the first two years of a child’s life has been approved by the Emirates’ Federal National Council. According to the Huffington Post, husbands can sue their wives for failing to breastfeed. If a woman is medically unable to breastfeed, a wetnurse must be provided for the child, apparently by the Council. The method of determining a woman’s ability to breastfeed remains unclear.

What if male politicians were reported on like Wendy Davis and other women are?

On Lip this week …

Unequal representation of women among the Australia Day Honours.

US President Barak Obama to victims of rape and sexual violence: ‘I’ve got your back.’

Hero Condoms: ‘have sex, save a life.’