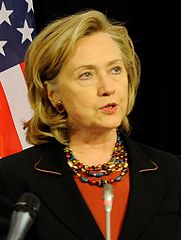 Emily’s List has kick-started its campaign to get a female president elected in the United States. The effort, titled ‘Madam President’ will focus on battleground states such as Iowa, Nevada and New Hampshire, and will include town hall meetings, online events, ads and Internet engagement. Emily’s List President, Stephanie Schroick fuelled the widespread rumours that Hillary Rodham Clinton will run, but nothing was confirmed.

A study from the British Medical Journal has suggested that breast implants may hide tumours, making the diagnosis of breast cancer more difficult, in turn leading to higher mortality rates. Women with cosmetic implants were nearly 40% more likely to die of breast cancer than those without. There was no evidence that the implants themselves caused cancer.

U.S to approve morning-after pill for women 15 and older

The Food and Drug Administration said Tuesday that it would make ‘Plan B One-Step’ available without a prescription for women as young as 15 in the United States. The contraceptive would be available on pharmacy shelves, instead of being behind the counter. Cecile Richards, president of Planned Parenthood, called the decision ‘an important step forward’ because it ‘will eliminate some of the biggest barriers and hurdles that women face in getting emergency contraception.’

Shirin Sharmin Chaudhury of the ruling Awami League was on Tuesday sworn in as Bangladesh’s first female speaker. She is also the youngest speaker in the country’s history. Women now occupy the positions of Prime Minister, Opposition Leader, and Deputy Leader of Parliament in Bangladesh. Chaudhury, who was the state minister for women and children affairs until her election as the speaker of the Parliament, was elected unopposed.

Afghan women rock out at ladies’ only concert

Also covered on Lip this week

University of Queensland cuts gender studies as a major

Only half of eligible Australian women get pap tests