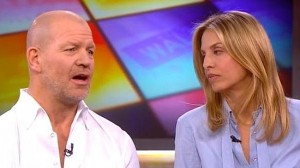 In a stunning move of dickery and PR self-sabotage, the co-founder and chair-person of athletic wear brand Lululemon has blamed the size of women’s thighs for the fabric of their pants being thin. ‘It’s really about the rubbing of the thighs, how much pressure is there over a period of time and how much they use it,’ he said, dismissing the crazy idea that it was the quality of the fabric that made the pants sheer. His wife, co-founder Shannon Wilson, essentially face-palmed beside him before attempting to recover the situation.

Skyler Davis, an 8th grader from Kansas, has reportedly been suspended from his school for wearing an over-the-shoulder ‘purse’ (looks just like any other bag to me). Despite having no rules against such wear, Skyler’s school has suspended him ‘until he agrees not to wear it’. The principal claims there is an ‘unwritten rule’ that says kids can’t bring bags or purses into the classroom – seems like a totally legit reason for telling a boy not to wear a purse. Good job on supporting individuality, Anderson County Junior Senior High School.

Melbourne production company WTFN has acquired the film and television rights to Kerry-Anne Walsh’s book The Stalking of Julia Gillard and says Griffiths has signed to play the lead role. The show is expected to screen on Australian TV in 2015.

Attention-loving American Apparel is never far from the headlines, particularly in feminist circles. This time, the brand has earned the ire of the African and African-American communities for its appropriation of ‘an actual African spiritual system associated with good health and well-being’, voodoo, as part of a spooky Halloween window display. ‘It baffles me as to why a store would make the decision to mis-appropriate a sacred spiritual system that is old as time in Africa itself. Alas, we know that even hipsters — for all their self-congratulatory “progressive” ways — can be just as bigoted and racist as anyone else,’ writes Shantrelle Lewis for Ebony. Check out the Change.org petition for more info.