victim blaming entrenched in violence towards women, report finds
Well, it’s White Ribbon day, marked by marches and social media campaigns designed to bring the problem out into the open. But is acknowledging the problem in the public sphere enough to change what happens behind closed doors? A report released today hints at the extent to which victim blaming is entrenched in violence towards women. The results, reported on The Guardian, show that men tend to externalise the issue, while women internalise it particularly when it comes to the violent behaviours of people they know.

Further, to mark White Ribbon Day, MP Sarah Henderson has given a passionate speech in the House of Representatives in honour of a friend who was murdered by her partner. For the record, even though White Ribbon campaign says one woman dies every week due to domestic violence, already this year there has been 66 deaths. Watch the speech here:

sexist ad seeking “easy on the eye” beer maid removed from gumtree
A Gumtree ad for an “easy on the eye” beer maid to work at the Adelaide Test this week has been removed after it received complaints.  The employers, a group of 20 allegedly “handsome” guys, were searching for a busty wench to accompany them to the test match and fetch them beer while they watched the cricket. I can only assume they retreated into this shared Octoberfest fantasy to stave off the boredom of being at a cricket match. I can’t say I’m surprised, however, given that I’m confronted with this shit from the Bavarian bier café hanging at my train station on a daily basis: 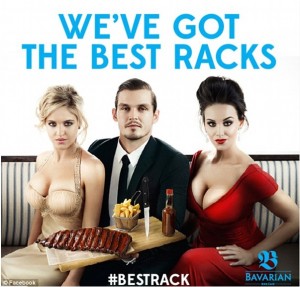 This is what I’m dealing with.

female genital mutilation banned in gambia
President Yahya Jammeh of Gambia has announced the banning of Female Genital Mutilation effective immediately. They follow other African nations Nigeria, Egypt and South Africa in outlawing FGM. At present, up to 76% of women in the country have been subjected to this form of torture. However, while this move shows how support for FGM is faltering in public, just how effectively this law can be enforced remains to be seen.

tackling the underrepresentation of african women working in education
Still in Africa, a fantastic piece in The Atlantic tackles the underrepresentation of women working as school teachers across the continent. UNESCO reports that seven out of ten African countries face an acute shortage of teachers. Campaigns such as No Ceilings argue that the only way to remedy this deficit is by getting more women through school by removing the economic and cultural barriers to their participation.

#HappyToBleed campaign trending on social media
Tampons are trending again as #HappyToBleed spreads across social media. The campaign targets menstrual taboos on the Indian sub-continent. It was launched in response to comments made by the head of the Sabarimala temple in Kerala, Prayar Gopalakrishnan, who apparently didn’t anticipate any backlash when he claimed that women would only be allowed to enter the temple grounds once a machine had been invented that could scan a woman’s menstrual state upon entry.