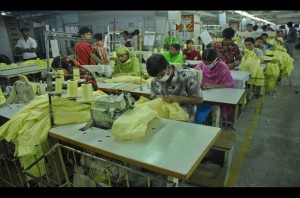 More than 140 Bangladeshi workers, mostly women, fell ill on Sunday after drinking contaminated drinking water. The women were employed at two clothing factories near the capital Dhaka. While their condition is not considered life-threatening, they are reportedly suffering vomiting and stomach pain.

‘Primarily we suspect the water supply of the factories could be contaminated,’ he told the media.

The incident comes less than two weeks after more than 450 workers were made ill from contaminated water at the nearby Starlight Sweater factory.

The incidents follow the collapse of a building housing five garment factories in April that killed 1,129 people. Bangladesh is home to more than 4500 garment factories and the country earns more than $80 billion in exports each year from the industry.

Officials say have not identified the brands manufactured at the factory but indicated they were Western labels.