in brief: allegations of workplace harassment at brisbane airport 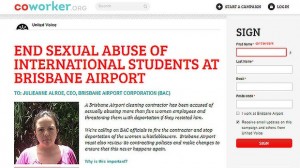 All five women work as cleaners at the airport and have reported being sexually abused by a man working for the same cleaning business.

The reports surfaced on Wednesday afternoon after the cleaning company received a complaint and immediately called the police. On top of abuse, the women stated that he also threatened to have them fired or deported if they reported him.

A colleague of the international students, who works for the same company, started a petition online, which included an open letter demanding that Brisbane Airport ‘fire the contractor and stop deportation of the women whistleblowers.’ While the woman states in the letter that she never experienced the abuse, she writes, ‘I witnessed my employer harass and abuse several of my female colleagues’, and also states that she ‘was warned about him’ when she began working at the airport.

The petition has so far garnered 2,175 signatures, as at Monday 18 November, with many people leaving messages of support for the women speaking out.

A spokesperson for Brisbane Airport said that they were “appalled” upon learning of the abuse, also stating that the cleaning company had stood down the man under question, immediately after the allegations surfaced.

Brisbane Airport has also ordered an immediate inquiry on the cleaning company.