in brief: british think-tank calls for introduction of ‘granny leave’ 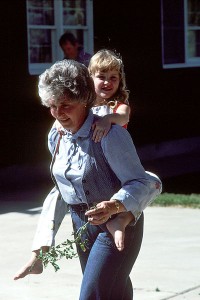 A report by the Institute for Public Policy Research, a progressive UK think-tank, has called for greater recognition of the caring responsibilities of older women as they increasingly look after their grandchildren and elderly parents.

The report’s authors, Dalia Ben-Galim and Amna Silim, argue that balancing care responsibilities and work is becoming increasingly difficult for older women creating a ‘sandwich generation’. Members of this group, typically women over the age of 50 are increasingly caught between providing care for their grandchildren and elderly parents and continuing work in paid positions as they pursue their careers.

The report’s key findings include that in the UK:

In order to address some of these issues the report suggests introducing more flexible work and leave options including assistance for re-entering the workplace, and recognition of and support for the crucial caring and family support roles that grandmother’s play. The think tank has suggested that ‘Granny leave’ could last for up to six months and would give grandparents the statutory right to return to jobs following their time off.

Schemes to address these needs are already available in Germany, Belgium, and Slovenia.

These recommendations come after the UK Health Secretary, Jeremy Hunt, recently said men and women should be offered flexible working hours if they need to care for elderly parents.