in brief: channel seven’s natalie barr thinks we should stop blaming men for our problems 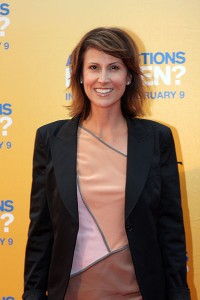 In a column for The Daily Telegraph, Barr gives her own perspective of feminism, opening with ‘Hey ladies, men aren’t the enemy. Am I the only woman who’s not angry at men? I’m a woman and I’ve never felt discriminated against.’

She goes on to talk about her professional life and the success of her career. Like many in the media, Barr begun with internships and small jobs, working her way up to her current position on Sunrise.

This is all good and well. She’s lucky to have had such positive experiences – especially in television, an industry notorious for underpaying its female employees.

But unfortunately Barr’s experience isn’t the case for all women, and she implies that any woman who feels discriminated against in the workplace is simply not ‘taking ownership’ of her problems.

‘When I was 20 I missed out on a cadetship at the ABC, but I didn’t for a second think it was because I was a girl,’ she said. ‘I’m starting to wonder if many of us need to find a better drum to beat than the one that blames men for our problems.’

Not only does Barr make sweeping generalisations based on her limited experience, she blurs the line between what is and isn’t feminism.

‘I just don’t think “us” against “them” helps anybody in the long run.’

Several high-profile men and women have articulated responses to the piece, highlighting Barr’s confusion between feminism and misandry.

Ita Buttrose, Jessica Rowe and Sarah Harris, some of Australia’s most revered women in the media, have put together a video in response. The panel discusses the need for women to stand up for themselves in the workplace, and consider Barr’s idea of ‘taking ownership,’ a flippant dismissal of the real problems at hand.