in brief: clementine ford banned from facebook for 30 days after reposting abusive messages sent to her account 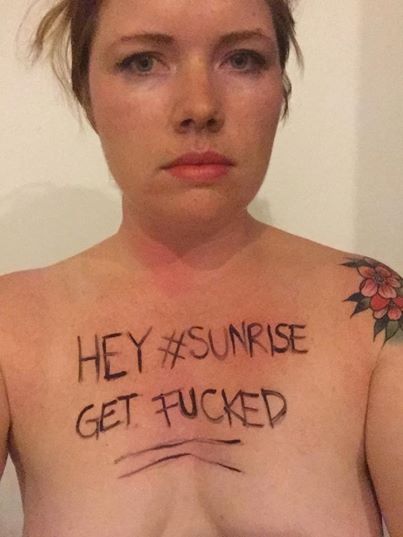 On Sunday 21 June, prominent feminist Clementine Ford was banned from Facebook for thirty days after a so-called violation of community standards, in which she published screenshots of online abuse that were sent to her Facebook account.

The abusive messages came after Ford called out Sunrise on their victim blaming, writing them a fantastic f%&k you message on her bare chest, as well as sending them this:

‘I’ve taken nude photos just because I have a smart phone and it’s fun. None of that means I have asked for my privacy to be violated, my photos stolen and my very self, made available for public humiliation and judgment. Consent is everything.
When Channel 7’s Sunrise asks ‘when will women learn’ instead of ‘why do men continue to view women as objects they can defile and violate while the world watches and tut-tuts’, they are victim blaming. They are saying it’s the responsibility of victims of crime and assault to prevent it and not the responsibility of society to make such crimes intolerable and unacceptable. When will women learn? Learn what? That our bodies do not belong to us? That we have no right to determine who sees those bodies?’

After this was posted she received over 1000 abusive messages, some of which she shared on her Facebook page, resulting in the ban. It should be noted that not one of the offenders responsible for the messages was banned from the site.

Late yesterday afternoon, after strong public pressure (including an online petition with over 10,000 signatures), the ban on Clementine’s account was lifted; however, as she reminds us:

‘… the vast majority of abuse targets do not have the same level of resources that public writers and people with large Twitter followings have at their disposal. After FB banned me for having the audacity to publish photographs of the onslaught of sexualised abuse being sent my way, I was able to mobilise an army of passionate, enraged people. I do not take lightly the fact that I have more privilege than many others when it comes to these issues. Many who are punished do not have that kind of support.’

‘I’m thrilled that common sense has prevailed and that I have had some kind of victory here. But it still stands that such a ban should never have happened in the first place. No one should be punished for speaking out against abuse, especially not the kind of cowardly abuse sent under the banner of ‘private correspondence’. Private correspondence is a conversation mutually entered into by more than one party and defined by respect and sometimes discretion. It is not someone sending you unsolicited emails calling you a filthy whore.’