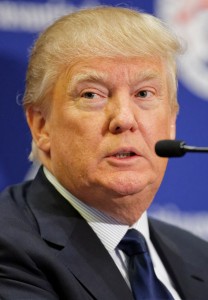 American politician Donald Trump has lost a TV contact for Miss Universe and Miss USA after posting a series of racist comments on Twitter which targeted Mexicans.

Univision, an American-Spanish TV network, has refused to air the pageants which are partly owned by Trump, in response to the presidential candidate’s comments that the Mexican government allow rapists and criminals over the border.

‘Druggies, drug dealers, rapists and killers are coming across the southern border. When will the U.S. get smart and stop this travesty?’ Donald Trump tweeted.

‘When do we beat Mexico at the border?

‘They’re laughing at us, at our stupidity.

‘And now they are beating us economically.

‘They are not our friend, believe me.

‘But they’re killing us economically.’

On Thursday, Univision, which is co-owned by Trump himself, made a statement which condemned Trump’s comments.

‘At Univision, we see first-hand the work ethic, love for family, strong religious values and the important role Mexican immigrants and Mexican-Americans have had and will continue to have in building the future of our country,’ a Univision spokesperson said.

Trump’s comments also offended Colombian artist, J. Balvin, who was scheduled to perform at the Miss USA pageant and has now cancelled his performance.

‘This isn’t about being punitive, but about showing leadership through social responsibility,’ Balvin said.

‘His comments weren’t just about Mexicans, but about all Latins in general.’

In a strange move of retaliation against Univision, the Republican politician has banned the channel’s employees from his Miami golf course.

Trump sent a letter on Friday to Randy Falco, the Univision chief executive that ‘under no circumstances is any officer or representative of Univision allowed to use Trump National Doral, Miami – its golf courses or any of its facilities’.

The situation has continued to escalate in the following week with Trump publically publishing an anchor’s personal phone number and calling for the resignation of Univision’s top executive.