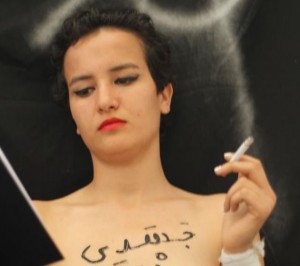 FEMEN member and activist Amina Tyler has reportedly been arrested again in the Tunisian holy city of Kairouan. Her arrest comes as she allegedly snuck past through heavy security checkpoints, where police were preventing extremely conservative Islamists from holding an annual conference. Tyler was disguised in a veil, and after she passed through security, she attempted to take off her clothes (as is the trademark of FEMEN members’ protests) and wrote ‘FEMEN on the wall of a cemetery.

Video of her arrest has been released via Tunisian news website Nawaat, where the reactions of Tunisians can be seen towards Tyler as she is arrested and taken into custody. This video shows what sorts of reactions Tyler’s acts have elicited. The resident seen screaming at the camera’s words as ‘she is dishonouring us. We will protect our town, but a dirty girl like her shouldn’t come among us’.

Tyler is likely to be charged with “conducting provocative acts” when she faces court on Tuesday. These provocations, according to Tunisian Interior Ministry spokesman Mohammed Ali Aroui, are ‘against the morals and traditions of Tunisian society, which is a Muslim society’.

Prior to Tyler’s attempted protests at the holy site, there had been clashes between police and soldiers and the conservatives, known as salafis, in an attempt to stop the ultraconservative group’s conference being held. These clashes had to be dispersed with tear gas.