in brief: gym accused of kicking out a Muslim woman for wearing a headscarf 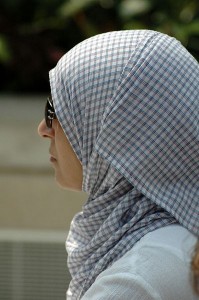 A Muslim woman claims that gym chain, Planet Fitness asked her to leave for wearing a headscarf in the gym, which apparently did not fit their dress code policy.

The incident involves New Mexico resident Tarainia McDaniel, originally occurring in 2011, and detailed in a new lawsuit, according to the Albuquerque Journal.

‘McDaniel alleges in a lawsuit filed by her attorney, Rachel Higgins, that she explained the requirements of her religion but was told only that she could wear a baseball cap.’

An employee said the dress code was sometimes waived but that it couldn’t be in her case because the head covering was red, according to the complaint.

An attorney for the gym chain, Erika Anderson, told the Journal that Plant Fitness ‘didn’t know the head covering was for religious purposes.’

A spokesperson reached out to the paper saying, ‘while it cannot comment on the pending litigation… the company policy accommodates head coverings worn for religious purposes.’

The news comes less than a week after one of Planet Fitness’ locations made headlines for telling a woman to cover up for looking ‘too intimidating.’