in brief: katy perry is confused about being a feminist 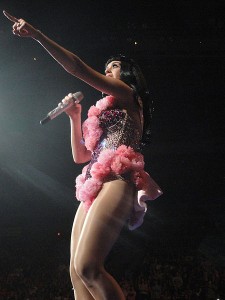 You have to give a girl props for trying.

Having previously declared, ‘I am not a feminist, but I do believe in the strength of women,’ during her Woman of the Year acceptance speech in 2012, Katy Perry has now decided she is one, minus the actual meaning of the word.

Host Karl Stefanovic asked Perry in a recent interview, whether or not she considers herself a feminist.

Perry replied, ‘A feminist? Uh, yeah, actually. I used to not really understand what that word meant, and now that I do, it just means that I love myself as a female and I also love men.’

The real meaning of being a feminist – in Chimamanda Ngozi Adichie’s words, someone who believes in the social, political and economic equality of the sexes – is slightly lost on Perry, but far be it for me to criticize the pop star. She is trying, and she still clearly believes in the strength of women, which is important, and a great message to promote.

Hopefully someone will tell her the real meaning, though, and she can truly declare herself one!