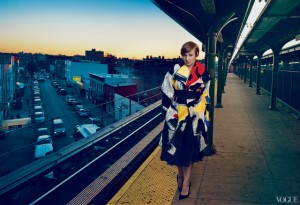 It comes as no surprise that US Vogue has re-touched images of Lena Dunham in her much anticipated cover shoot.

The differences between the un-retouched and retouched photos are not vast. So called ‘improvements’ will always be made in fashion photographs.

However, Jezebel writer Jessica Coen had this to say:

‘This is about Vogue, and what Vogue decides to do with a specific woman who has very publicly stated that she’s fine just the way she is, and the world needs to get on board with that’

What’s more important and worthy of our attention is that Dunham has made it into the magazine for her work and her entertaining and refreshing series rather than simply looking like a model.

Jezebel’s overt reaction to the air-brushing has its place but, in regards to Dunham’s pictorial, it seems a tad severe. Looking at the photographs, the changes that were made didn’t seem like they were aiming to change Dunham’s physique, but merely to tweak it.

Everyone gets tweaked when they are photographed for a magazine, especially if it’s going to be Vogue, one of the most powerful fashion magazines in the public eye. Of course, many think altering photographs is a not positive thing, but it’s not going to stop. At the end of the day, all we have to measure its ethics is how far the airbrushing is taken and in Dunham’s case, it’s not that far at all.

What do you think, Lipsters?

Did Vogue go too far in their altering of Dunham’s cover shoot? Is slight air-brushing/photoshopping ever ethically justifiable?

Share your opinions with us in the comments below!