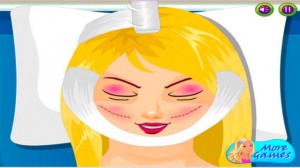 A new game offered through the Google and iTunes stores has been slammed after its release last week. The free app is called ‘Plastic Surgery & Plastic Doctor & Plastic Hospital Office for Barbie Version.’ The simulation, for players nine and up, allows its users to perform liposuction on an‘unfortunate,’ larger woman.

The game description is particularly disturbing:

‘This unfortunate girl has so much extra weight that no diet can help her. In our clinic she can go through a surgery called liposuction that will make her slim and beautiful. We’ll need to make small cuts on problem areas and suck out the extra fat. Will you operate on her, doctor?’

The app doesn’t just teach kids about society’s narrow standards of beauty, it pushes it in their face. It says that ‘extra weight’ means they’re not ‘beautiful,’ and after hours of playing the simulation, kids will no doubt start to look at their own bodies in a similar way.

The developer, Corina Rodriguez, has 27 other games on iTunes, most of them focused on makeovers and dress-ups.

Beauty oriented games have always been around, some of them worse than others. But there is a sick clarity to little girls pretending to give liposuction to the ‘problem areas’ of their ‘extra weight’ that separates this game from all the rest. Kids who aren’t slim are being told they’re not beautiful.

Everyday Sexism, a project to raise awareness of day-to-day sexism, caused an uproar when they tweeted about the game. They received a huge amount of support from their followers, resulting in iTunes quietly removing the app from their store.

One thought on “in brief: liposuction simulating game marketed to tween girls”