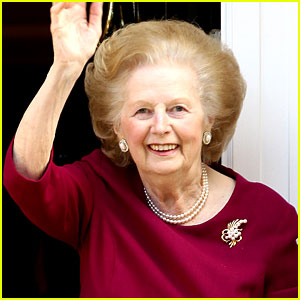 Last night I was informed that Margaret Thatcher, the ‘Iron Lady,’ had died of a stroke, aged 87.  I rushed to the Internet, the fountain of all knowledge, to make sure it wasn’t just a hoax – and found that Google was inundated with articles about the remarkable woman who was Prime Minister of the United Kingdom from 1979 to 1990.

Like any political figure, the articles ran the gamut from reserved and flattering, to critical.  The BBC reported that a number of prominent politicians, including US President Barack Obama, German Chancellor Angela Merkel, and current Prime Minister of the United Kingdom, David Cameron, had expressed sadness at her passing.  Cameron in particular praised Thatcher as a ‘great Briton,’ and asserted that she had ‘taken a country that was on its knees and made it stand tall again.’  In contrast, The Guardian reported that several hundred people in Brixton, in south London, the very place that saw two riots during Thatcher’s rule, celebrated with a large street party.

Thatcher’s government is best known for privatising several state-owned industries, and the involvement in a year-long scuffle with unions during the Miners’ Strike of 1984-5.  Thatcher also became closely associated with the Falklands War in 1982, and was seen as one of the key figures behind the fall of communism in Eastern Europe.  Regardless of her politics, it cannot be denied that Thatcher was a groundbreaker.  In 1974, a mere five years before she would become Prime Minister, she stated, ‘It will be years – and not in my time – before a woman will lead the party or become Prime Minister.’  Though she denied that the women’s liberation movement had benefited her in any way, she can still be regarded as one of the most influential women of the 20th century.  She steadfastly remained true to her own values, famously stating at a Conservative party conference in 1980 that ‘To those waiting with bated breath for that favourite media catchphrase, the U-turn, I have only one thing to say, you turn if you want to. The lady’s [referring to herself] not for turning.’  For better or for worse, Margaret Thatcher has become one of the defining figures of modern British politics.

One thought on “in brief: Margaret Thatcher dies of stroke, aged 87”